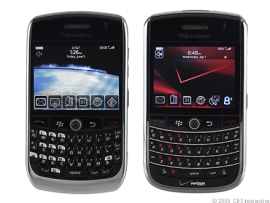 For Research in Motion, the maker of the popular BlackBerry smartphone, staying No. 1 isn't about apps or fancy hardware, it's about cost effectiveness.

For all the hoopla surrounding Apple's iPhone and the various Android smartphones that have hit the market recently, many forget what is still, by a healthy margin tops in the market: RIM's modest BlackBerry. And RIM intends to stay on top by doing what it does best: offering something that's more affordable and can operate on wireless networks more efficiently than its flashier competition.

During the first quarter, RIM added 4.9 million new BlackBerry subscriber accounts for a total of 41 million subscribers. The company's device shipments were up 40 percent to 37 million compared with the same quarter a year ago, executives said on its quarterly earnings call.For the moment, RIM is a strong leader in the smartphone market. But chinks in its armor are already starting to show as competition from Apple and Android heats up.

"Weak offerings in touch (phones) and 3G leave the company heavily exposed to a slew of new smartphones now hitting the market," Ed Snynder, an analyst with Charter Equity Research, wrote in a note to investors when first-quarter earnings came out. "While it will certainly maintain its lead in e-mail-based smartphones, we see little chance it can sustain its market share, pricing or margins long-term."

Prices already seem to be under pressure. The average selling price of a BlackBerry in the fourth quarter was about $311, below management's own estimate of $320. The company said it expects first-quarter 2010 shipments to average $305 to $310.

Meanwhile, Apple and Android each had strong quarters. Worldwide iPhone shipments surged 131.6 percent in the first quarter over the same period last year, according to IDC. Android, a mobile operating system used on several different phones, also grew during the first quarter taking the No. 2 position in the U.S. market, according to NPD Group.