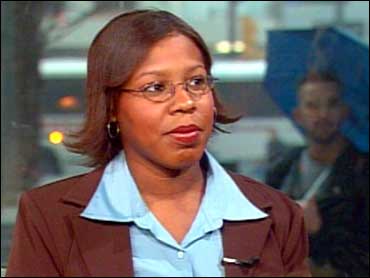 On a manicured Louisiana college campus, in the warmth of a Cajun fall, friends walk to class. But you'd never know among them is a living, breathing portrait of courage.

In a tiny community set in a sea of sugar cane fields, Ebony Martin grew up in a home shattered by domestic violence.

She says, "My father was very physically and mentally, emotionally abusive toward my mother, since as long as I could remember. He would beat her up all the time and stuff."

And six years ago this month, her father's anger exploded into madness.

A TV reporter explained the incident at that time: "The man's sister-in-law tells police he called her before the incident and told her what he was going to do. She says she called 911 but by the time authorities got to the trailer it was too late."

It all happened on a Sunday night. Incredibly, the very next morning, Ebony Martin, still very much in shock, came to school, showing up at Libby Mannina's first-period class.

Still dazed by the horror of her parents' death, 12-year-old Ebony went to live with her grandmother, Mary Williams, with her sister Albany, still too young to comprehend the awful truth.

Ebony says, "It was hard at first. 'Cause for the funeral, she was like, 'Mama's sleeping. Get her a blanket. She's cold.' And, you know, from the first year, we pretty much couldn't tell her too much. We just said Mama was gone and she's not coming back."

It was then, at the lowest moment of her life, when Ebony realized only education could free her from her poverty and maybe her grief. She threw herself into her studies, earning straight A's.

This past spring, Ebony Martin rose from the ashes of her childhood to become valedictorian of Loreauville High School, Class Of 2003.

There are still many obstacles in her path: Ebony has a scholarship, but money is tight. And without a car, Ebony can't go home unless she bums a ride. A former teacher wishes things were different.

In her letter to the Week of Wishes, Mannina writes: "Dear Early Show, I am writing you about an inspirational young woman that has touched my life…"

Mannina has challenges of her own; she was forced to quit teaching because of rheumatoid arthritis. But her only wish is to see Ebony Martin get what she needs to continue on her way to the top.

Her letter says, "I hope you will consider my wish for this remarkable young lady. She is well deserving of a special wish."

So on Tuesday's The Early Show, Mannina and Julie Simon-Dronet from the University of Louisiana in Lafayette surprised Ebony. Simon-Dronet had a laptop computer for Ebony to help her with her studies.

Mannina's wish, however, called for a car, so Peter Butterfield from KIA gave Ebony the keys to her new red car.

He said, "Ebony, on behalf of KIA in its 650 KIA dealers, I'd like to present you with our all new 2004 five-speed and this car, Ebony, is the safest SUV on the road. It's rated five-star-safety from the U.S. government. We're so excited to be able to help you because you have proven to many, many people that despite adversity, you can fight through it and succeed in life at such a young age. And we're all very proud of what you have done."

All Ebony could do was cry. She was not the only one to be surprised, for her generous heart, Mannina got a car as well.

Butterfield said, "Elizabeth, you will be the first United States consumer to actually drive an Amonte because they haven't gone on sale yet. These cars will go on sale in the next couple of weeks at dealerships."