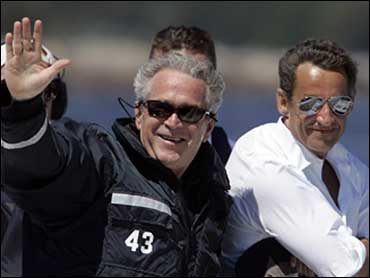 The frank-talking President Nicolas Sarkozy is out to puncture stereotypes about ivory tower French leaders as he makes his United Nations debut this week, enshrining a new foreign policy that slides Paris closer to Washington on key world hot spots.

Sarkozy's differences with the United States - over global warming, in particular - may make a mark on world diplomacy, too, at this year's U.N. General Assembly.

American eyes will be on the conservative Sarkozy as much for his U.S.-friendly attitude as for his policies. It has been a long time since U.S. officials so eagerly awaited a French president - following a long chill under Iraq-war-opponent Jacques Chirac and decades of differences over issues from Middle East peace to European communism.

"It's an excellent relationship," U.S. Secretary of State Condoleezza Rice said Friday after talks with French Foreign Minister Bernard Kouchner. "I think there are many, many things that France and the United States are going to be able to do together."

Such comments set many French people on edge; those who say Sarkozy is compromising France's perceived moral authority in world affairs to earn Bush's approval. They will closely watch Sarkozy's reception at the United Nations, a place where Chirac was widely admired for his talk of a "multilateral" - meaning less U.S.-dominated - world.

"Allies, not aligned" is how French officialdom is describing its relations with Washington, careful not to alienate voters who remain skeptical, even fearful, of standing too close to U.S. policy in Iraq and beyond.

Bush and Sarkozy will not meet one-on-one, but will see each other at the General Assembly. They met before Sarkozy's election in May, and twice since - and Sarkozy's spokesman, David Martinon, said a trip to Washington is expected soon.

Sarkozy has called himself "a friend of Israel," distinguishing himself from what many have claimed were pro-Arab leanings by Paris. He has taken a tougher line on Russia and China than have his predecessors.

Sarkozy's outspoken and English-speaking foreign minister has gone even further.

While Chirac was warning Washington against invading Iraq in 2003, Kouchner said deposing Saddam Hussein was not a bad idea. Last week, Kouchner shocked many Europeans by saying the world should prepare for the possibility of war in Iran.

While he and Sarkozy later toned down the remarks, they both want stronger sanctions over Iran's refusal to halt nuclear activities - a crucial topic at the U.N. assembly.

Kouchner also has U.N. experience, as administrator in Kosovo, that may smooth the way for his boss in New York.

Sarkozy was relatively untested on the world stage before his election, and faces a packed schedule of bilateral meetings Monday and Tuesday that could prove sensitive.

He starts with climate change, delivering a speech on behalf of the European Union likely to demand a more rigorous world push against polluters. Sarkozy has berated the United States for not taking the global lead on fighting global warming.

Sarkozy will talk with Afghan President Hamid Karzai about continuing violence that ensnared a new French victim on Friday.

Sarkozy, meanwhile, has become an inadvertent player in the U.S. presidential election campaign.

Republican candidates, especially, are enamored of Sarkozy's stunning approval ratings and are studying his strategy for winning over French voters - famously attached to their welfare protections - despite pledges of risky labor reforms and costly tax cuts.