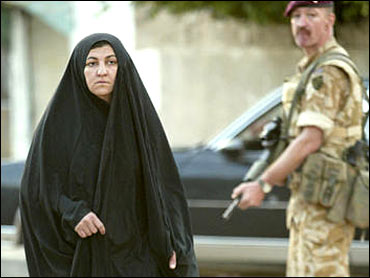 U.S. troops must do more for rape victims who are being turned away by Iraqi police and hospitals and the country's reconstruction should include reform of sex crime laws, a human rights group said Tuesday.

Until Iraqi police can do the job themselves, U.S.-led coalition forces should establish a unit of men and women trained to investigate sex crimes and sex trafficking, Human Rights Watch said in a report.

Human Rights Watch said crimes against women have increased along with other crime since Saddam Hussein was ousted in early April.

The problem, however, could in part be traced to a regime whose laws fostered attitudes that women could invite sexual assault, the report said.

"Plans for Iraq's reconstruction are taking shape and the rights of women and girls are at stake," it said.

The report was based on interviews in May and June in Baghdad with four victims of sexual violence and abduction, as well as with dozens of Iraqi police officers, U.S. military police officers and hospital and other officials.

Human Rights Watch noted that rape and abduction were serious crimes in Iraq. But it said the penal code under Saddam allowed a man to escape punishment for abduction by marrying the victim and set light or reduced sentences for so-called honor killings - the murder of women accused by relatives of besmirching family honor by being raped.

"There is a long-standing cultural stigma and shame attached to rape that positions victims as the wrongdoer and too frequently excuses or treats leniently the perpetrator," the report said.

Now, in the chaos of post-Saddam Iraq, hospitals are crowded with victims of other crimes.

"In some cases, women and girls who have sought assistance for sexual violence were refused medical attention because some hospital staff do not regard treating victims of sexual violence as their responsibility, or give such care low priority given their limited resources," the report said.

Human Rights Watch found instances of police unable or unwilling to give women referrals for hospital examinations needed to build a case against their attackers.

Some police officers told the rights group women have invited sexual assault by venturing outside their homes before Baghdad was safe. Many women are staying at home - and away from school and work, the report said.

Women's status in Iraqi society was the envy of their counterparts elsewhere in the Arab world in the 1970s and 1980s. Their role in public life, however, steadily diminished as Saddam sought to accommodate a rising tide of religious fundamentalism in the wake of Iraq's defeat in the 1991 Gulf War.