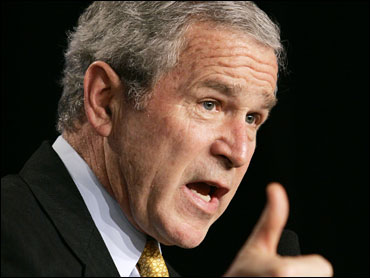 
Kids with behavioral problems always act out more as the end of school nears. The smell of freedom becomes overwhelming. That must be what is happening to President Bush now that he is in his last year-and-a-half.

How else to explain his shock-and-awe attack on a small but helpful program to provide health insurance to children without any?

The program in question is called the Children's Health Insurance Program (CHIP). It was launched a decade ago to help get health insurance for kids whose families couldn't get it.

But it seems difficult for the current president to understand that lots of employers in America don't actually give health insurance to employees. It seems even harder for him to accept that many people with jobs can't afford to just go out and buy health insurance.

President Bush genuinely seems to resent the idea of the government providing insurance to children of the employed. He has a giant CHIP on his shoulder.

As I reported in a column a few weeks ago, CHIP is set to expire at the end of September. The administration is grudgingly willing to let it continue, but only with a budget increase of $5 billion over its $25 billion "baseline" budget for the next five years. After inflation, that's a cut, and it would knock about 1.5 million kids out of the program, according to the Congressional Budget Office.

(Apparently one of the administration's proudest accomplishments, covering prescription medicine under Medicare, was salvo-free. But never mind that.)

The National Governors Association and Congress, however, believe there is a need to expand not contract CHIP, because it's getting harder for low-earners to get insurance from their employers or buy it themselves.

The Senate has voted to increase the CHIP program by $35 billion over the next five years, the House by $50 billion. They will huddle in the next few weeks to come up with a compromise, but the president said he would veto either bill.

President Bush apparently isn't confident in his veto pen, however. So last Friday night, his administration launched a pre-emptive "shock and awe" strike against CHIP.

At 7:30 p.m. on Friday, August 17, the man who runs the CHIP program for the feds, Dennis G. Smith, notified states there would be changes in the rules about who qualified for CHIP.

Right now, states have flexibility in deciding which families qualify. No more. The feds will decide, and they will decide in a miserly way.

Most states are now trying to loosen the qualifications because there are so many families in need. The Bush administration wants states to knock that off, and it is using rules to force them to do so.

Seventeen states qualify families for CHIP if they have incomes above 250 percent of the poverty line and no other insurance. So kids whose parents earn up to $51,625 qualify in those states.

The Bush Administration wants to cap the program right there, despite the fact that many states, including California, want to cover families that earn 300 or 400 percent of the poverty level. The new rules would make it essentially impossible for states to expand CHIP even if the president loses his battle with Congress, despite the fact that the states themselves pay about 30 percent of the costs of CHIP.

A White House spokesman, Tony Fratto, said this was necessary to prevent the CHIP program from becoming "essentially a middle-class entitlement."

Let's hope this isn't just the beginning of the salvo of the president's end-of-term bad behavior.