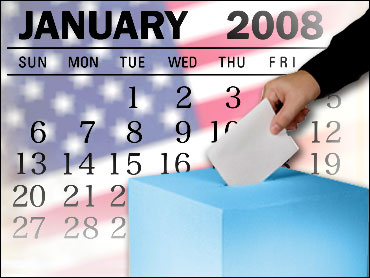 Get ready for the Holiday caucuses.

The official starting date for the presidential nominating processes of the Republican and Democratic parties is about to take a great leap forward — to an earlier point in January of 2008, and perhaps even to December of 2007.

Here's what is happening, and why is matters:

Florida has officially advanced its primary date to January 29 — a date that had been reserved by both parties for voting in South Carolina.

Because South Carolina does not want to have to compete with Florida — a state with a higher profile, more delegates on offer and a bigger role in the November competition — a chain reaction is about to begin.

The South Carolina Republican Party will announce today its decision to advance the state's primary to January 19. That means that the New Hampshire primary will be moved to an earlier date, probably January 12. Iowa will then set a caucus date that is at least a week earlier than the New Hampshire vote.

There is a good deal of speculation that Iowa officials, who are determined to defend the influence of their first-in-the-nation vote, could set a date in December. That would mean that the process of selecting delegates to the Democratic and Republican national conventions of 2008 could begin before Christmas 2007.

At the latest, the process will now begin days after New Year's celebrations.

The advance in the schedule is a sobering development for anyone who hopes to see the process produce unexpected results — and for anyone who dreams that grassroots activists might still have a significant impact on the selection of the nominees.

Moving the caucuses and primaries to dramatically earlier dates — a step the parties tried to resist but now seem to be grudgingly accepting — is most likely to benefit frontrunners such as Democrats Hillary Clinton and Barack Obama and Republicans Mitt Romney and Rudy Giuliani, who have money and organizations in place in the key states.

This churn will be of particular concern to the campaign of John Edwards, who even now is struggling to maintain his lead position in Iowa. Edwards does not have much margin for error left. And if a shift in schedule causes an Edwards stumble — or makes it easier for Clinton or Obama to concentrate time and resources on knocking him out earlier — that squeezes even more dynamism out of a process that is already suffering from a deficit of that precious political commodity.

The schedule shift will also reduce the opening for a late-starting campaign by former Vice President Al Gore or Wisconsin Senator Russ Feingold.

The bottom line is an unsettling one: Speeding up the process speeds up the prospect that status-quo contenders will secure the nominations of both major parties at a time when — after eight years of Bush-Cheneyism — the country needs a radical shift in direction.
By John Nichols
Reprinted with permission from The Nation