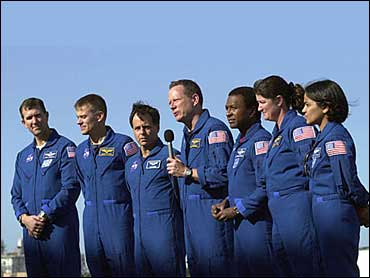 Two years ago, NASA commissioned a special educational project. It was to be a multi-media, interactive presentation, to be used by museums - focusing on the shuttle Columbia's purely scientific trip.

"NASA wanted to highlight STS-107 because it was really focused on research, where a lot of the shuttle missions up to that point, the last three years, have been focusing on space station construction. And this one was like an old-style mission," says Brad McLain. He produced the project along with his brother Sean.

The consensus was that shuttle flights had become a routine and through museums, NASA intended to inform why space exploration is important and show how exceptional astronauts are.

With "Space Research and You," NASA intended to invigorate the program and the crew was very excited about it, says Sean McLain.

The brothers interviewed the astronauts in October and November of 2001 and communicated with them throughout the whole project, which was completed in April. But Brad McLain says they never got a chance to show them their work.

"We had hoped to do some follow-up things with the crew, show it to them. So they never got to see the final results," he says. The plan was to showcase it for the crew and their families when they got back. "We worked with Lucas film, Del Padre communications. All these people who worked on it were planning a big festival event."

Here are some of the brothers' impressions on the crew:

William McCool: It was the first trip for this Navy pilot. The brothers remember him as a marathon runner with a very tight family. They say McCoool was very excited about this mission because he believed humans should be in space and this mission was important step in getting there. The McLains say he was an idealist, who knew how to attain his dreams - a humble guy, but fiercely competitive and very smart. He was the most exuberant of the bunch and at the end of the interview ,the brothers note, he took two blow pops instead of one.

Rick Husband: It was Husband's second trip into space. Family man, very devout and religious, definitely captain of team are the words the McLains use to describe him. He would have landed the plane, but controls never went over to him, the brothers say.

Laurel Blair Salton Clark: She preferred all four names used. The brothers remember her as very detail oriented, aware of the process of every experiment, to the nth degree. The medical doctor was very interested in impact of space on the human body.

Dr. Kalpana Chawla: The crew called her KC. The McLains say she was like a poet, her description of Earth brought the crew to tears during the interview. On her first trip, she would miss sleep so she could watch Earth out the window. She was an aerospace engineer so she knew every detail of the shuttle, the brothers say. They describe her as centered and peaceful.

Captain David Brown: The McLains remember him as an over-achiever. Brown took a year off from medical school, because he got the flying bug. Brown, who graduateda t the top of his medical school class, joined the Navy, and then went to flight school. The brothers note he spent an hour after the interview to talk to them about photography. The McLains got very closed to him and were going to take him to meet George Lucas at Skywalker Ranch and show him the project.

Michael Anderson: For the payload commander, it was his second trip into space and the McLains say he showed so much joy when he talked about going there. He gave them tiny details that really made them feel what it would be like to go into space, the brothers say. He was a quiet, soft-spoken man, who described it as magical. He told them a story about the time when sleeping in space a high proton energy photon hit his face and woke him up, when he realized what it was, he went back to sleep. Anderson went to the same church as Rick Husband. The brothers remember him as a big science fiction fan who was always smiling.

Col. Ilan Ramon The McLains say the fighter pilot was a funny guy with a great sense of humor. He was excited to represent his country as a first for Israel. The brothers remember him as forthcoming and warm. He was aware people looked at him as a symbol, but he didn't want any special treatment.

The brothers note the astronauts were a tight-knit group. "I think the mission was slipped some eight times," says Sean McLain. "We interviewed them a month after Sept. 11. And they were so excited to go. They were so tightknit because they had so much time to train together. They were so well bonded. They spoke so highly of each other."

Brad McLain says, "They were definitely a family. And all of them in the interviews, we spent two days with them, mentioned the childhood fantasy dream."

Sean McLain says hopefully now their project will turn into a tribute to the astronauts. "Because, in its current form, it's a really fun, exciting program, and it's not really not going to be used in its original form. It stands more as a tribute or a testament to the crew."

His impressions from working on it? "I think it's important to realize that there are extraordinary people here at NASA, and we've become so routinely familiar with space flight that we tend to forget that. And these people represent the best and the brightest that the world has to offer. And it's important," he says.

Brad McLain is an educator and museum specialist. Sean is a writer and film producer. They were selected for this project because Brad had worked with NASA before, doing space and educational programs for museums.