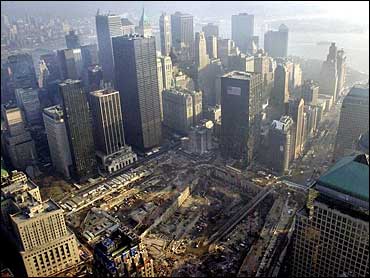 Counter-terrorism officials say the threat of al Qaeda terrorism against the United States remains high even though there are few specifics.

At the height of the morning rush hour, police sealed off downtown Washington streets and emptied blocks of office buildings.

Police surrounded a truck a half-mile from the White House and arrested a driver who had threatened the President.

"He said there was a bomb inside the truck and it was going to blow up," a police officer told CBS News Correspondent Bob Orr.

No bomb was found. But, the overwhelming response underscored a collective nervousness -- a fear of new terrorist attacks.

There's been a drumbeat of warnings from officials who should know.

CIA Director George Tenet: "They have reconstituted. They're coming after us. They want to execute attacks."

FBI Director Robert Mueller: "There may be individuals in the United States who we do not know about who could commit attacks."

Some worry attacks could come now during the Muslim holy month of Ramadan or in response to the scheduled execution of Aimal Kasi, the Pakistani man who killed two CIA employees nearly ten years ago.

Terrorism expert Brian Jenkins says, in fact, an attack could come at any time.

"The terrorists are very opportunistic, they will attack when and where they can and with any means they can mobilize," he told Orr.

A senior law enforcement official, speaking Tuesday on condition of anonymity, said the amount of intelligence about potential attacks on the United States and its allies has increased this month, rising again to the level before the Sept. 11 attacks.

At the same time, government experts say the financial toll of the terrorist attacks on New York City amounts to $33 billion to $36 billion in lost wages and business, property damage and cleanup.

The losses, estimated from October 2001 through June, include $7.8 billion the 2,795 people killed at the World Trade Center would have earned and $21.6 billion to clean up and replace the twin towers.

The report by the Federal Reserve Bank of New York, released Tuesday, appears in the November issue of the bank's Economic Policy Review.

Gordon Johndroe, the Homeland Security spokesman, said Tuesday that recent warnings about attacks against railways, oil and gas and other economic targets remain in effect.

"There is intelligence, while it is general, that has pointed to and raised concerns about our critical infrastructure," he said.

It is not specific enough to raise the nationwide alert level, which remains at code yellow — the middle of five threat levels -- because of a lack of specific details on where and when an attack may occur, Johndroe said. Yellow means "significant risk of terrorist attacks."

Last month's public warnings -- issued Oct. 9 and Oct. 23 -- came in part from the release of taped statements from high-level al Qaeda leaders threatening new attacks. Counter-terrorism officials regard them as calls to action for field operatives.

The latest tape, with a voice claiming to be Osama bin Laden, was aired Tuesday on al-Jazeera. If validated, the tape would be regarded as significant because it made reference to recent events, the first hard evidence in a year that bin Laden was alive.

In addition, U.S. law enforcement officials said the talk that intelligence is picking up surrounding next week's NATO summit in Prague is similar to what they heard before the July 2001 G-8 summit in Genoa, Italy.

As they did in Genoa, where the gathering of world leaders passed without terrorist incident, security officials are considering closing the Prague city center to all but summit personnel.

Some recent warnings in Europe stem from the same intelligence that led to the U.S. warnings, Bush administration officials said.

Security was increased at a number of European ferry ports and at NATO headquarters in Brussels, Belgium. Counter-terrorism authorities also remained concerned about al Qaeda strikes in the Middle East.

The financial services industry, with many businesses headquartered at the trade center, lost 12,000 jobs in October 2001, and an additional 6,000 jobs through June, the report said. The number of jobs at the city's two airports fell by about 20 percent.

The report calculated the lost income of the victims of the attacks by finding the average income of trade center employees -- $127,000 a year -- their average age, and estimating how much they would earn until they retired. The loss amounted to $2.8 million per worker.

The city lost an additional $3.6 billion to $6.4 billion in wages from job cuts and reduced hours in businesses like the restaurant industry, the report said. Studies showed some residents also smoked and drank more and became depressed after the attacks, which likely also cut productivity.

The cleanup and replacement costs for the World Trade Center includes a $1.4 billion estimate to replace a commuter rail hub destroyed underneath the center.

An $11.2 billion estimate to replace the trade center's two towers assumed officials "will essentially duplicate what existed before the attack." Six architects have issued competing proposals for developing the site and no conclusions have been reached.