This analysis was written by CBS News correspondent Elizabeth Palmer, and Farhan Bokhari from the CBS News Islamabad bureau, both of whom are attending the Afghan summit in London. 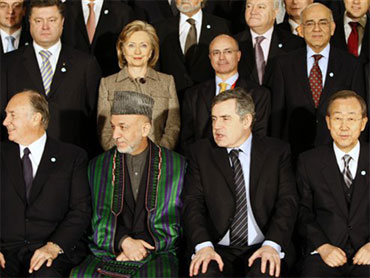 (AP Photo/Alastair Grant, Pool)
An international conference — and then what?

For embattled Afghanistan, no clear answer has emerged yet from the elegant meeting room in London, where top leaders from governments around the world have gathered to discuss a new road map for the central Asian country.

The year ahead in Afghanistan promises to be turbulent and probably bloody. The U.S. troop surge ordered by President Obama will probably provoke more conflict in the short term — because the intensified U.S. campaign will successfully target more militant hideouts, or because the hardliners will fight back more vigorously, or both.

In view of this bleak prospect, what can the London gathering accomplish?

Above: Front row from left to right, the Aga Khan, Afghan President Hamid Karzai, British Prime Minister Gordon Brown, U.N. Secretary-General Ban Ki-moon, and U.S. Secretary of State Hillary Clinton, second from left in back, pose for a group photograph with other delegates, in London, Jan. 28, 2010.

First of all, keeping the world engaged on the Afghan conflict is essential, so it's crucial to keep the dialogue alive.

That's probably what Afghan President Hamid Karzai intended when he asked for help to tackle a range of issues — from improvements in internal security to financial aid for ordinary people.

But the elephant in the room, in this case at the conference, is corruption.

So far there is little more than lip service being paid to this embarrassing and crippling problem, which infects the Afghan government from top to bottom.

Karzai initially yielded to global pressure by announcing that a new body would be set up specifically to tackle it. But the developing world is littered with the broken promises of leaders who have promised to stop corruption at home. There is simply no evidence, in spite of vast U.S. and European pressure, that Karzai is capable of rooting out corruption, irrespective of his intentions.

Finally, a key catch-phrase emerging from the London conference is "Reintegrate the Taliban."

It's being spun as a bold new initiative to achieve peace.

Upbeat and crisp-sounding, it's well-crafted to trip off the tongues of the legions of politicians, diplomats and generals engaged in salvaging the Afghan mess.

But as Michael Semple points out, reintegrating thousands of battle-hardened fighters and their commanders is going to be messy, too — and will have some unpalatable aspects.

Semple knows whereof he speaks. He's the former political advisor and European diplomat who was expelled from Afghanistan two years ago by President Hamid Karzai for unauthorized contacts with the Taliban. Nowadays, he looks like a man who was ahead of the curve.

The hundreds of millions of dollars in international money on offer today in London is only part of the key to coaxing the Taliban off the battlefield, says Semple. "There will have to be power-sharing agreements that will be hard to swallow."

"Senior figures in the Taliban leadership will have to be folded into the Afghan government and given real power," Semple predicts.

He's talking about men who have blood on their hands; who have been killing U.S., NATO and Afghan soldiers. Some of these men believe girls shouldn't go to school and that adulterers should be stoned to death.

The press releases announcing progress and accord at the London conference have already been drafted, but they don't go very far in answering long-suffering Afghans' main question: when will we see peace, security and progress at home?