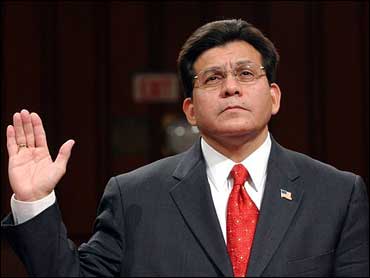 It was clear to us back in March that Alberto Gonzales' continued presence was making it hard for the Justice Department to do its job. Now it has become clear to him as well. He is resigning as attorney general, and it appears that one of the reasons he decided to go is that the controversies surrounding him are too much of a distraction for the department.

We are not sorry for him. He was too disengaged to register when he was in trouble - and insufficiently aware of his limitations to turn down the job in the first place. The Justice Department is at the center of a series of debates about the war on terrorism, and Gonzales was never capable of holding up his end of those debates.

That said, Gonzales also took some hard and undeserved hits. U.S. Attorneys serve at the discretion of the AG and, ultimately, of the president. If the AG dismissed a bunch of U.S. Attorneys for bad reasons, or no reasons at all, it is no business of Congress - unless the firings were connected to a genuine abuse of power, such as an effort to initiate baseless prosecutions of the president's political opponents. Some Democrats have charged precisely that, but they have no real evidence of it. The firing of the attorneys was an example of mismanagement, but it was also a relentlessly hyped non-scandal.

The attack on Gonzales as a perjurer, meanwhile, is a smear. In February 2006, Gonzales testified before Congress about the National Security Administration's monitoring of communications by suspected terrorists. That monitoring had been secret until The New York Times reported on it a few weeks before his testimony. Gonzales said that the program whose existence the Times had revealed was not controversial within the administration. This testimony is supposed to be deceptive because an earlier version of the monitoring had caused controversy inside the administration. But Gonzales was careful, in his testimony, to limit his remark to the specific program that was under discussion at the time - and explained, to the extent that browbeating senators would let him, that other, related matters had been controversial inside the administration.

The coverage of Gonzales has sometimes flirted with the notion that the job of an attorney general to act as a "check and balance" on the president who appointed him. Needless to say, this theory, which somehow only gets applied to Republican administrations, has no constitutional basis. Any adviser to the president, whether high-ranking or low-ranking, should of course serve as a check on the president in the sense of urging him not to do something that the adviser considers ill-advised or wrong. The attorney general should have the knowledge, intelligence, and judgment to offer that type of advice - which we doubt Gonzales did. But the AG is part of the executive branch, not a fourth branch of government and still less an arm of Chuck Schumer subverting the administration from within.

The next attorney general should be a respected, competent conservative who can serve the president well: something Gonzales could not do, and some of his critics do not want anyone to do.