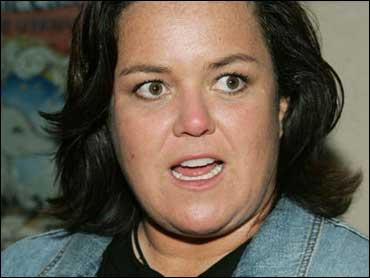 This column was written by Myrna Blyth.

It's been musical chairs at the networks for the last couple weeks, and now it turns out that Rosie's back — Rosie O'Donnell, that is. She's back on daytime TV as the replacement for Meredith Vieira on "The View." Meredith is leaving to replace Katie Couric on "Today." And, as I'm sure you know by now, Katie is skedaddling to CBS to be the anchor on the Evening News and to perk up 60 Minutes.

But the return of Rosie is, in a way, the most unexpected of the changes. "The View," which is produced by Barbara Walters, is a daily all-girls gabfest. The co-hosts, who include Star Jones, Joy Behar, Elizabeth Hasselbeck, and, much of the time, Walters herself, chat with each other about the news of the day and then interview celebrities. Rosie will be taking on the role that Vieria had as the group's moderator, which might not be such an easy fit. These days Rosie is not shy about giving her opinion. Last year she told Geraldo Rivera that George Bush "is basically a war criminal. He should be tried at The Hague." Not very moderate.

Rosie was the host of her own daytime talk show for six years, before she quit five years ago. When Rosie first appeared on daytime TV, she had a very different persona. She palmed herself off to her audiences as just your typical single, working mom who cared about cooking, kids, and crafts. Of course, not many single working moms are multimillionaire lesbians with bodyguards for their kids and a political point of view similar to Michael Moore's. Those were the days when she claimed to the audience almost daily that she really, really, really had a crush on Tom Cruise.

Yes, she was supposed to be the "Queen of Nice" and the audience bought it. Of course, Rosie was helped by a shrewd PR team and a plethora of women's magazines which put her on their covers, gushed over her presumed good nature, and pretended that Rosie in her dark man-tailored suits was just a bit tomboyish.

I know because I was a women's-magazine editor at the time and went along with the spin. In truth, Rosie, who can be funny, was never nice. I remember a luncheon I once gave where she was the guest of honor. Magazines are always giving parties for celebrities so that advertisers will come and think the magazines are hipper than they really are. And celebrities agree to be the guest-of honor because the magazine gives a hefty contribution to a charity in the celebrity's name.

Our luncheon was held in the Rainbow Room for several hundred guests the first year of Rosie's talk show, back when she was very popular. The room was full of fans who wanted to get close to her, thinking that Rosie in real life was like the cheery Rosie she played on television.

But she was having none of it. She sat on the dais, looking gloomy and bored, with me and Libby Pataki, the pleasant wife of New York's governor. When someone came over to get an autograph, she said she didn't give them. Mrs. Pataki, to mask the awkwardness, murmured something like "Oh, that's interesting," while Rosie scowled.

When she got up to speak, she turned and said, "Listen, Lib, you don't like that I don't give autographs? Well, I only give them to kids. Anyone older I say, 'Get a fuggin life!'" Rude, crude, and snide. But the audience laughed and applauded, thrilled that the Queen of Nice had shared with them the nasty way she brushed off her fans.

When Rosie finally "came out" it was a stage managed PR. masterwork. It was portrayed as not really being about Rosie, but rather was just part of a "news special" hosted by Diane Sawyer about how unfair it was for gays not to be allowed to adopt in the state of Florida. It was promoted by Barbara Walters on "The View" and segments were on "Good Morning America" and ABC's "World News Tonight", as if it was a major news story. Even the title, "Rosie: For the Sake of the Children," fit right into this carefully constructed propaganda campaign

But did it work? Soon after, Rosie left her daily show and told a nightclub audience gleefully "The bitch ain't so nice anymore." The magazine which she was running with Gruner & Jahr, and which carried her name on the cover, imploded. Maybe the women of America who liked the Queen of Nice had more trouble with Rosie the Rottweiler.

And Rosie already is mixing it up in preparation for her entrance on "The View." It seems Rosie has a problem with Star Jones, who has been on "The View" since its inception. Jones, no shrinking violet herself, has recently lost a tremendous amount of weight but has not explained exactly how she has accomplished this. On her blog, where she shares her opinions in free form verse, Rosie recently wrote, "Star Jones had weight loss surgery / she had part of her stomach bypassed / that is how she lost 1/2 herself /she refuses to say this / which is her right / but we do not have to pretend / we do not know." She also called Jones in her poem, "a scared lil girl."

During an interview with Diane Sawyer a couple weeks ago, when she already knew she was coming to "The View," but it had not been officially announced, Rosie said about Jones, "I think it's very hard for everyone to participate in the illusion she presents as her truth." That's kind of funny since for years Tom Cruise-loving Rosie was participating in an illusion presented as truth. And bringing in the big bucks while she did.

But Rosie is probably just warming up with Star. Come fall, when everyone is tuning in to see "The View" chat-fight, Rosie will probably be eager to take on some even heftier opponents like, maybe, the Republican Congress and the president.

Myrna Blyth, former long-time editor of Ladies' Home Journal and founding editor of More, is author of" Spin Sisters: How the Women of the Media Sell Unhappiness—and Liberalism—to the Women of America." Blyth is also an NRO contributor.
Reprinted with permission from National Review Online