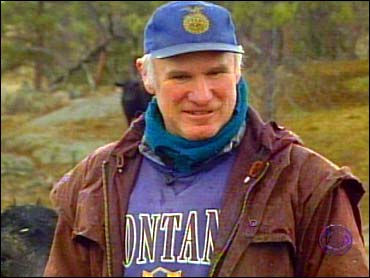 From time to time, CBS Correspondent Steve Hartman uses the random toss of a dart and a map of the United States to guide him in his quest to prove that "Everybody Has A Story." During August, he's taking a trip down memory lane with some of the many people he has profiled.

To me it doesn't matter where the dart hits or even who my finger finds, all I want is a story people can relate to.

Unfortunately, not many people have spent the last 40 years wishing for cows and coveting farm implements. And yet I'm hoping you can at least relate to this story of a shattered dream.

Lynn Godfrey was one of six children raised on a ranch. Among his siblings, Lynn was the one who wanted to follow in his father's footsteps.

A lot ranchers dream of having a son stay on, but Dale Godfrey was never one of them. Lynn explains that his father believed in not taking anything from anyone. "And so he wanted us to do the same way he did," says Lynn.

That meant starting from scratch. Lynn says that at the time, he and his wife Nancy could barely afford steak, let alone cattle. When his father retired, the ranch was sold to the highest bidder.

"I was hurt," says Lynn. "But I gotta accept it, because that's what he wanted and I was the child and he was the parent."

Lynn says it was the biggest disappointment of his life. Because he couldn't be a rancher. Years later, he did everything in his power to help all his kids live the dream — give or take.

For 31 years, Lynn taught high school and channeled his passion for ranching into the Future Farmers of America. Students say he worked long hours to try to provide them with the opportunity he never had.

Lynn says helping the kids made him feel like he was succeeding and that was enough for him, until he could save enough money to retire and follow his real calling.

Today, at the age of 57, Lynn Godfrey is a brand new rancher. He has 1,500 acres, 30 head of cattle and enough money left over to buy equipment.

The best part of it all for Godfrey is that the land looks familiar -- he got his father's land back. Yes, sometimes you have to go an awful long way just to get back to where you started.

Though it may have seemed unfair at times, Lynn says he now understands why his parents did it.

It's everything he dreamed it would be, and more.