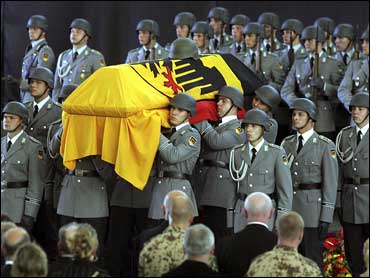 A new budget estimate, which says the government will need to use $9 billion of Social Security reserves to make ends meet, foreshadows a difficult fall for Congress as it struggles to pass spending bills for next year.

Democrats are already calling on President Bush to submit a new budget request that reflects lower surplus projections. The nonpartisan Congressional Budget Office says the shrinking surplus is mainly due to the 10-year, $1.35 trillion tax cut and the sluggish economy.

"This is happening much faster than even we thought it would happen, and it is a failure of the president's budget," said House Minority Leader Dick Gephardt, D-Mo.

The CBO update, officially released Tuesday, could severely crimp the ability of the president and Congress to fund their priorities: increasing defense and education spending, providing a Medicare prescription drug benefit, paying for a new farm subsidy program and extending expiring tax breaks.

Yet Republicans say the tax cut, particularly the $40 billion in tax refund checks that have already started hitting mailboxes nationwide, is just the medicine needed for the economy's ills and that key spending priorities can still be met, albeit at lower levels than Democrats want.

"Democrats may be kicking and screaming because tax cuts took away their spending money, but Americans are laughing all the way to the bank," said House Budget Committee Chairman Jim Nussle, R-Iowa.

The CBO now projects the total budget surplus for the fiscal year that ends Sept. 30 at $153 billion — $162 billion from Social Security, minus the $9 billion needed to balance the books.

Click here for a closer look at the Bush presidency.
Click here for more on U.S. taxes.
The surplus is down $122 billion from the CBO'May estimate but still an enormous amount. The first installment of Bush's tax cut accounted for two-thirds of the reduction, with most of the rest due to dwindling tax revenues from the slowing economy.

Over the next 10 years, the CBO is forecasting a $3.4 trillion surplus, including Social Security, down from $5.6 trillion in its May forecast. The tax cut and the associated changes in interest costs account for more than $1.7 trillion of the surplus reduction.

The new CBO report comes less than a week after a sunnier forecast by the White House Office of Management and Budget. It also predicted a shrinking surplus, but projected a non-Social Security surplus of $1 billion this year and next.

As a practical matter, spending the Social Security portion of the surplus has no effect on retirement benefits in the future. And it is true that both parties used to spend the money routinely. But now both have promised not to - and they're fighting over who can appear more responsible, reports CBS News Correspondent Bill Plante.

White House budget director Mitch Daniels portrayed the differences between the OMB and CBO numbers as relatively tiny and said the Social Security pledge was "symbolic." He said it would be "a big mistake" to make Social Security so sacrosanct that other priorities are discarded.

"These are reasonably small differences when you take everything into account," Daniels said.

Mr. Bush said last week the Socil Security fund should not be tapped unless the nation was at war or in a recession. CBO analysts say the economy should narrowly avoid a recession, but they project growth next year at 2.6 percent, compared with a 3.2 percent growth forecast by the White House.

The Bush administration last week forecast a surplus of $158 billion this year, $173 billion next year and $3.1 trillion over the next 10 years. Over the decade, the White House figured defense spending at $198 billion above the numbers used by the CBO, and Medicare spending $37 billion higher.