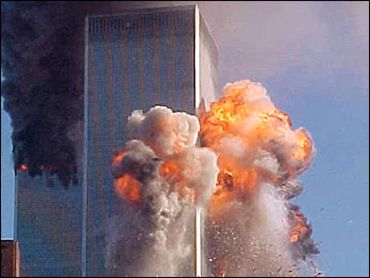 People from around the world are drawn to ground zero to remember, and to try to understand something that defies explanation: the murder of nearly 3,000 people.

On 9/11, Leslie Haskin was living her dream as an insurance company executive in the World Trade Center's Tower One

Haskin was on the 36th floor and said the building began to crumble as soon as the plane struck. She said explosions were everywhere and she had to "dodge the bodies and the debris and the chaos."

"Within seconds, the floor above us was already caving in to our floor," she told Smith. "So we knew we didn't have long in this building. We kind of wandered around that concourse forever looking for a way … that was safe to get out."

What Haskin witnessed that day was too much for her and it triggered her own devastating collapse. Right after 9/11, she was committed to a psychiatric hospital.

"I had suffered a severe mental breakdown and was diagnosed with PTSD," she said.

Diagnosed with post-traumatic stress syndrome, any sound or smell that reminded her of 9/11 could trigger a reaction within Haskin, who has written a book called "Between Heaven and Ground Zero," which is based on the journal she kept during her recovery.

"I boarded … all the windows in my home with these thick shutters and wouldn't let my children leave," she said. "I wasn't sleeping."

Haskin tried unsuccessfully to return to work and began a downward spiral. She lost her home, job and car and couldn't be a good mother to her children.

"I lost everything that I had built for myself," she said. "My son's cousin opened his doors to us. His name is Sean. I love him dearly … He took us in and he took care of us."

At one point, Haskin had to decide whether to continue to wallow in her self-pity, anger, pain and guilt, or to try to heal. She turned to her faith for salvation. Leslie has reached a crossroads and had to make a decision.

"You could see it in her eyes, 'cause her eyes had seen so much, her eyes still seemed wounded and I remember that first time that I saw that her eyes weren't wounded any more," said Haskin's pastor at Goodwill Church, John Torres.

After falling so far and years of therapy, Haskin is now ascending. A year ago, she went back to work near ground zero.

"I want to live and love as hard as I can," she said. "And I want to, you know, take that extra step outside of what's comfortable for Leslie's world."