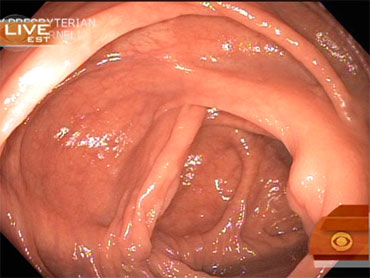 He finished his mention of "The Early Show" by showing a "preview" of the procedure with a man and a woman walking down a dark stairwell.

Though it was a joke, Smith's actual colonoscopy Wednesday morning at the New York Presbyterian/Weill Cornell Medical Center did, in fact, look like a walk a dark, pink hallway.

"He just said, 'This makes me really happy,' so I think the drugs have kicked in," she said.

Smith's colon, Couric added, looked "as clean as a whistle."

As he checked the folds of Smith's colon, Pochapin said everything looked normal. Pochapin even had a chance to point out Smith's liver.

Pochapin explained the colon's function is to remove fluid from the body.

He said, "It's basically the dryer of the body."

Couric remarked on a controversy in the past year that doctors were missing flat polyps during colon exams.

"It really came down to the fact that they were doing the procedure too quickly," she said.

Pochapin agreed, saying, "There are certain quality indicators. One of them is the withdrawal time -- the time it takes (to go) from the very beginning of the colon to the very end. The minimum amount of time should be six minutes. We strive here to look at the cracks, and it should be eight minutes, and the longer you take looking around these folds, the better you're able to see these polyps or flat lesions. If you're not careful looking around, things can hide."

Couric added when you're getting a colonoscopy, you should ask your doctor about their experience and how long the procedure will take.

"The baseline (for polyps) is 15 percent to 25 percent - 15 percent for women and 25 percent for men," Pochapin said. "They're out there. We have to make sure we take our time and do a quality exam. Good prep, slow withdraw, and of course, making sure that the patient's safety and comfort is always pleasant."

Smith asked Pochapin how long the colon can be.

Couric chided Smith, "You apparently have a very long colon."

She also pointed out she was wearing a visor shield.

"I was told I was going to be in the 'splash zone,' and I could have gone all day without knowing that."

Pochapin said with a laugh, "Sorry about that."

To view Smith's entire colonoscopy experience, click on the video below.

But what about you?

Health insurance covers the screening for many insured Americans, but for uninsured people, Pochapin said there are programs available to get a free or reduced-cost colonoscopies. The American Cancer Society and local health centers are great places to start, he said.

Couric said if you don't want to get a screening, you should think about the people you love.

"They want you to be around for a long, long time," she said.

Smith said the colonoscopy gave him "tremendous peace of mind," and "upped the ante" on his health, reminding him to do a better job of taking care of himself.

Pochapin told Smith the health and wellness message is an important one.

"Keep yourself fit and watching your diet, eating correctly and making sure your doing all the things to prevent these diseases," he said. "We'll go to the doctor when you're sick, but you really want to go when you're well."

As for the entire experience of a colonoscopy, Smith said, "Nothing to it."