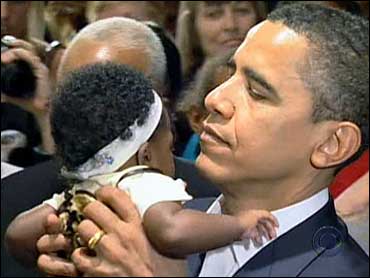 Barack Obama raised this question at the Democratic Convention in 2004, when he described himself as "a skinny kid with a funny name, who believes that America has a place for him, too." But does his "funny" name really matter to voters? What can pollsters find out about how open the American public is to candidates whose names (and backgrounds) are different from those of typical presidential candidates?

It takes time for rare or unusual names to be accepted. In the Broadway hit "Fiorello" (the story of Fiorello LaGuardia – the former mayor of New York City) by Jerry Bock and Sheldon Harnick, a group of Republican Party bosses turn their poker game into a search for a candidate to face the powerful Tammany political machine, a search for "Some qualified Republican who's willing to lose." One possible candidate with a polysyllabic ethnic name is rejected because, as one of them sings: "Nobody likes a candidate whose name they can't spell!"

John Kennedy's obviously urban Irish background, along with his Catholicism, was new to many voters in 1960. The 1988 Democratic presidential nominee Mike Dukakis, the first U.S.-born member of his family, had name issues with some voters. During his campaign, the country singer Loretta Lynn pointed out that Dukakis was simply not her kind of politician…. "Why, I can't even pronounce his name!'"

There don't seem to have been any polls taken that year about Mike Dukakis's name and how it affected voters. But in the most recent CBS News poll, we tried to see how voters reacted to the name "Barack Obama." It was hard to formulate such a question. Media pollsters who are measuring public opinion (as compared to the candidates' own pollsters, who may be trying to learn how to influence voters) don't want to put ideas into people's minds. We need to learn what ideas are there already.

So in the latest CBS News Poll we asked a number of questions that we hoped would tell us whether Obama's name was an issue. For some people, about 10 percent of registered voters, it was actually top-of-mind. For nearly four times as many, it was a worry, perhaps not for them personally, but for how it might affect other voters.

Late in the questionnaire, we reminded registered voters of the speech at the 2004 Democratic Convention that had catapulted Obama to public consciousness, and in which he'd said he had a "funny name." We then asked "Do you think many people would have a problem voting for him because of his name, or not?" Thirty-eight percent said many voters would have a problem voting for him because of it. And while that doesn't mean the individual respondent would, it clearly says something about their perception of other Americans, and perhaps other Americans they know. More Republicans than Democrats (45 percent to 36 percent) say it will be a problem with voters.

For some people, the concern was personal. Long before we asked the question that mentioned Obama's name and his characterization of it, and before we mentioned any of the Democratic candidates, we asked this question: "Other than running for President, what is the first thing that comes to mind when you hear the name Obama?"

Ten percent of registered voters said the first thing that came to their mind when they heard the name was the foreignness of it, and/or a perceived association with "Osama bin Laden." And those voters who did NOT have a favorable opinion of Obama were twice as likely as those with a favorable opinion to mention this. Those who thought his name would affect others also were more likely to be thinking of it themselves. Nearly one in five of those who said that they thought many voters would have a problem voting for Obama because of his name said in the earlier poll question that the name's non-American associations were the first thing they thought of when they heard his name.

Name and ethnicity work together, of course. And Obama's race is part of voters concern, especially for African-Americans. In our polls, black voters have consistently been more likely than white voters to say America might not yet be ready for a black president, although they do think Obama could win the presidency if he won the Democratic nomination.

As Obama keeps campaigning, and as voters start paying more attention, pollsters like me will continue to try and find out what voters see and whether their focus moves beyond his name, to the candidate himself and his platform.
By Kathy Frankovic

The money will be split between seven Vermont based charities.