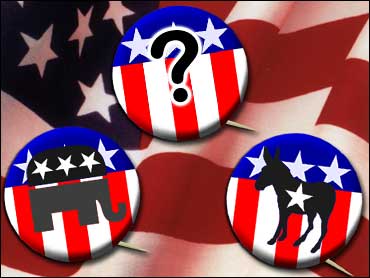 The dumbed-down duopoly that controls political power in our 50 states is devoted to just one thing: self-preservation. Americans can't take it anymore, but there's no alternative.

A few weeks ago, I wrote a column desperately begging for a real third party in 2008 and depressingly charting the obstacles the legacy parties have erected. I received a boatload of e-mail, almost all of which said: "I agree, it's even worse than you say, but what's the solution, Mr. Wisenheimer?"

Since then, Chuck Todd, the political savant who runs "The Hotline" — otherwise known as "crack for hacks" — has written that the time is actually ripe for a third party putsch. He notes a recent NBC/Wall Street Journal poll that found 45 percent like the idea of an "independent" party. And Thomas Friedman, the smartest serious American who doesn't run a hedge fund, also committed public fantasy by writing about a third party.

So trying to be responsive to both my readers and the obvious, spontaneous tsunami of support for an idea whose time has come, I have found a solution. It's easy and it comes in five simple parts.

First must come the name. Anything with any word that connotes ideology is out. Fuzzy marketing language is out, which scuppers Friedman's "American Renewal Party." "The New Party" would work fine but would you call them, "Newbies"? I'm going with the straightforward: The Independent Party.

Next, we need a top of the ticket. Yes, grassroots is better, but there is no time and no possibility of it happening. A top-down party will not achieve profound social change, probably ever. A top-down party, like the degenerate duopoly, will also be shackled to chains of marketing, fundraising and the decline of genuine community in America. That doesn't mean a third party won't be one hell of an improvement.

So the president comes first. The obvious choices are

My criteria are simple. The Independent Party's presidential candidate has to have both a track record of public service and a demonstrable impatience with modern partisanship. He or she must have national recognition, obvious competence in leading large organizations and extensive experience in public safety. Charisma is optional - nobody can sustain it anyway in a 21st century political campaign.

There's only one person I can think of for the job, so he just got the nomination: New York City Mayor Michael Bloomberg. Google him if you want to know more about why he fits the bill so perfectly; don't just trust me that he's freakishly smart, pretty funny, undeniably competent on a gargantuan scale and has the necessary maverick personality. Bloomberg also has the gazillions to bankroll steps 3, 4 and 5.

As a running mate, Bloomberg could select retired Marine four-star Gen. Anthony Zinni. A former commander-in-chief of the U.S. Central Command, Zinni was one of the earliest and sharpest heavyweight critics of the proposed and then actual war in Iraq.

Zinni especially took off after the neo-conservative chickenhawks in the Bush administration who rattled the sabers louder than anyone. Zinni has also said he'll never get involved in politics in rather contemptuous ways, which qualifies him for this job perfectly. Welcome aboard, General.

Step 3 is building an infrastructure. By Christmas 2006, Bloomberg and his team would need to create an Independent National Committee and an Independent Party Academy, a think tank and training facility. It needs a large staff of lawyers, ballot access experts and field organizers to ensure that Independents are on the ballots in all 50 states and the disenfranchised colony of Washington, D.C.

The party would also need a huge fundraising operation, though I don't think money will be a problem. All that is for the new party's National Committee.

The Academy would be a traditional think tank, but for the Independents, policy formation would be decentralized. The more important role would be the training of candidates and campaign workers for the fall of 2008 and conducting massive research and development about ways to communicate with citizens that are better than 30-second television ads, staged debates and creepy, farcical conventions.

At Stage 4, the Independents would announce a slate of very high profile Senate candidates. This would show the country that this is unlike any other third party movement in modern times. The Senate candidates would provide not just a network of surrogates and organization, but a true intellectual community. It would also demonstrate that when Bloomberg wins, he will be able to govern.

The basic slate is in good shape, though recruitment continues. (And if you don't find some of these names irritating, I won't have done this right.) In Arkansas, Wes Clark would take on Democrat Mark Pryor. Benjamin Franklin biographer Walter Isaacson, who was managing editor of Time magazine and CEO of CNN, would oust Mary Landrieu in his native Louisiana.

Tim Penny, a former congressman, articulate deficit hawk and published Washington-basher, lost an independent bid for governor but would succeed in dumping Minnesota's Norm Coleman in '08. The Other Michael Moore – the handsome former attorney general of Mississippi who led the legal charge against Big Tobacco – will take on Thad Cochran if he dares to run again, which he won't.

In New Jersey, Amy Gutmann, a well-known political philosopher who now runs the University of Pennsylvania (but has Harvard and Princeton roots) would run for what is certain to be an open seat.

In Rhode Island, Brown University's dynamic president Ruth Simmons could take the seat from Democrat Jack Reed. A former independent governor of Maine, Angus King, will take his expertise to the Senate.

John Warner will probably retire in Virginia; but if he doesn't, John Lehman, who showed some spunk investigating 9/11, will take his seat from under him.

And in Massachusetts, John Kerry's seat will go to the fabulously controversial

After Bloomberg wins, Nebraska's Chuck Hagel will cross the stupid aisle and become an Independent, along with Joe Lieberman, Olympia Snowe and Jim Webb - who would defeat Virginia's George Allen this November.

The Independent Party's final step will be to recruit as wide and talented a crop of House candidates as possible. I am morally convinced there is a huge population of talented, community-oriented people in their 30s and 40s who have been successful in business, journalism, education, science and philanthropy and who would like to be in government — but who think, like you do, that the current process is repulsive. There's a good one in every district.

The Independent Party will have no platform to later ignore or make a mockery of. It will have something far more important: a recognizable political sensibility shared by a sensible, non-polarized majority of voters who actually have very good b.s. detectors.

The new party's pragmatism will be: