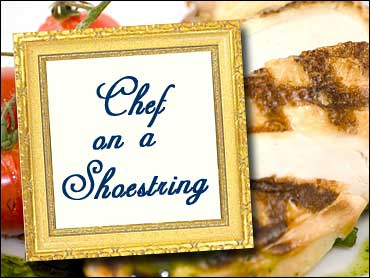 This weekend's Chef on a Shoestring has been a cooking teacher, a TV star and even an opera singer. But currently, Frederic Van Coppernolle is the executive chef at the French consulate in New York City. On The Saturday Early Show, he is preparing a three-course meal for four on a budget of $40.

Executive chef at the French Consulate, Van Coppernolle also had his own show on Food Network for a time called "How to Boil Water."

He's a farmer, sports enthusiast and he really is an opera singer. He has spent the better part of his career teaching others how to cook, having graduated at the top of his culinary school class in Paris and worked in a wide range of restaurants before coming to the United States.

He even taught at the prestigious Ritz Escoffier Cooking School. (Escoffier was the founder of classical cuisine at the turn of the century.)

For more about Van Coppernolle, go to his Web site.

Here's his menu for Saturday:

Camembert Cheese (pronounced KAM-uhm-behr): Napoleon is said to have christened this cheese after the Norman village where a farmer's wife first served it to him. This cow's-milk cheese has a white rind and a smooth, creamy interior. When perfectly ripe, the cheese should ooze thickly. When overripe, it becomes runny. Choose Camembert that is plump and soft to the touch. Avoid pieces with hardened edges which may forecast over-ripeness.

Heirloom Tomatoes: Heirloom tomatoes are grown from seeds that have not been altered by humans/science. This means that unlike the round red tomatoes you buy in the grocery store, heirlooms do not travel well, do not keep well and don't always look pretty. But the flavor is unbeatable.

Couscous: A staple of North African cuisine, couscous is a granular wheat flour that be served as a salad, underneath stew or in many other variations.