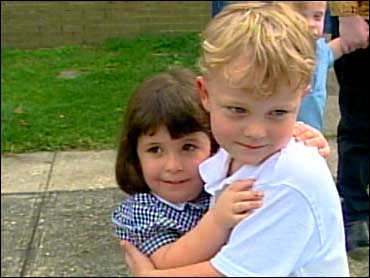 At a time when more parents are seeking the best in education for their children, CBS News Correspondent Steve Hartman travels to Metarie, La., to find a couple who found what they believe to be a better approach.

They want their son to learn about compassion and sensitivity rather than putting him on the fast track for an Ivy League degree.

Hartman says he was thrilled when the dart hit New Orleans, the town with so many characters. How could you go wrong? The yellow pages led him to Jonathan Koenig.

But when he sat down to hear Koenig's story, he realized the certified public accountant's story was not exciting. Fortunately, the rules allow Hartman to focus on any family member he chooses.

So after briefly considering Jonathan's wife, Barbara, he decided to profile their 3-year-old son Nathan, who spoke loudly with many unintelligible words.

The boy's story began a few months ago when his mother started looking around for preschools. She says everyone kept telling her what an important decision it was.

But Barbara Koenig didn't buy that, although she does agree that what kids learn in preschool can carry over. She decided on a class - a special education class - at Rudolph Matas Elementary. Teacher Sue Gorman notes Nathan has no special needs.

He's part of a program called reverse inclusion, in which a small number of regular preschool kids are introduced into a special needs classroom.

The theory is that kids like Nathan make perfect role models for kids like Drew, who has been diagnosed with something similar to autism. And, in return, hopefully Nathan learns a lot more than his colors.

Every parent want to prepare his child for success. And Nathan's are no exception. They just measure success a little differently.