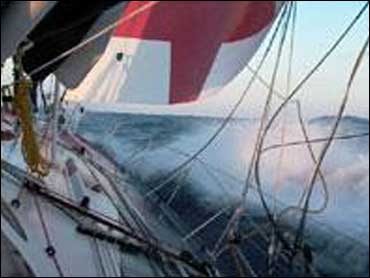 Brad Van Liew is 34. Right now, he is all alone in a sailboat somewhere off the western coast of Africa, leading the pack in the longest race on earth — a solo sailing competition around the world.

He had a tough day at work Friday.

"This morning, as expected, the wind filled in from the East and has built to a very uncomfortable 35 knots," he writes in an online journal that keeps spectators abreast of his latest adventures. "Overnight, while the wind was thinking about what velocity it wanted to inflict upon me, it went up and down as rain showers came scudding by."

Van Liew is the skipper, first mate, cook and deck hand aboard the Tommy Hilfiger Freedom America as it competes in the Around Alone race, which organizers describe as "the longest race on earth for any individual in any sport" — a 28,755 mile journey.

"It is a grueling single-handed sailing race, one of the most difficult and dangerous ever conceived where competitors are both the captain and crew, pitting themselves and their craft against the elements, alone, and where the finish line is literally a world away," say the race sponsors, a company called Clipper Ventures.

This is the fifth running of the Around Alone race, which started in 1982, although an earlier version called the BOC challenge was held in earlier years.

In the last five races sailors from 15 countries have competed, most hailing from the U.S., France or Britain. Eighty-seven sailors have started, but only 56 have finished. The rest either pulled out, abandoned their boats and were rescued or — in two cases &3151; apparently died at sea.

There are thirteen boats in this year's race, divided into two classes based on the length of each craft. Three sailors hail from the United States, two from Canada. The others come from Japan, Italy, Britain, France, Belgium, New Zealand, Bermuda and Switzerland. Some boats have budgets as high as $3 million.

The race started with a quick hop from Newport, R.I., to New York on September 15.

Then the first of five legs ran from New York to Torbay, England. Van Liew won that leg, finishing in 14 days — about three days faster than the next boat. That earned him ten points in the rankings. He now leads leg two, going from England to Cape Town, South Africa, by 700 nautical miles. He has about 1200 miles to go in that leg.

Leg three will go from Cape Town to Tauranga, New Zealand. Then Leg four runs to Salvador, in Brazil, and the final leg takes the race back to its starting point in Newport, probably sometime in April 2003.

This is Van Liew's second running of the race, and his earlier experience gave him a good idea of what was required this time. In the days before the first portion of the contest, he wrote: "This race is not about being an exceptional sailor, but about being an expert survivor."

"I will play the role of electrician, navigator, weather expert, cook, communicator and helmsman," he said. "It is a brutal job on the water, but also the most rewarding."

Since then, Van Liew's journal has been a litany of little victories and defeats — all experienced away from his wife Meaghan and 6-month-old baby girl, Tate Magellan.

"Last night I sailed into a large rainsquall that sucked much of the wind away for a few hours and cost me some mileage," he said on September 16. "It looks as if I am in the lead of class II at the moment, which is nice."

But the next day, he wrote, "Frustration seems to be the order of the day! I have been diligent about keeping boat speed up … however the desired effect has proven that my efforts were in vane (sic). The intention was to try and catch the same ongoing southwesterly push that the class I boats have enjoyed. Unfortunately, I came up a few miles short … This means that I will sit still for a few hours while the windless center of the low moves by and the winds slowly shift."

And on Sept. 20, his message was short: "Very busy right now. No wind means lots of work!"

But it's not all work. With the second leg under way, he wrote on Oct. 29, "As I write this dispatch I sit within the wind shadow of Tenerife in the Canaries Islands. The islands look spectacular and I just had a four-masted square-rigger motor out of the haze and I felt like I had gone through a time machine," referring to a large, old-fashioned vessel he saw across the waves.

On November 20, he offered: "At the moment Tommy Hilfiger Freedom America is sailing along in reliable trades. Although I wish for this to continue until Cape Town, it is impossible. So I will enjoy it while it lasts."

Of course, the ups and downs aren't Van Liew's alone to suffer. Other captains in the race also post their skipper's logs online, revealing the anxieties, frustrations and fraternity of their solitary course around the world.

Spirit of Canada's Derek Hatfield's last entry anticipates a difficult patch of sailing ahead: "It is a very tricky pathway through here and hopefully we will succeed."

BTC Velocity's one-person crew of Alan Paris, of Bermuda, confessed that a serious trigonometry error had skewed his navigation and cost him precious time. In his entry, Paris cries out: "HELP, what happened."

But aside from problems with winds, waves and math, the skippers have to deal with being along for vast stretches of time.

"I did a lousy job of preparing for holidays and such up to this point," write Everest Horizontal captain Tim Kent, an American. "Thanksgiving is approaching and all I have is a little can of turkey — same size as a small can of tuna fish — to make a sandwich with. I did have some Miller Genuine Draft and some champagne for the crossing of the Equator."

Those little celebrations are important, because when you're sailing the world alone, you earn them.

"Every time something is going to happen that is good, fun and fast — first you must pay the price with something painful and slow," Van Liew wrote Friday.