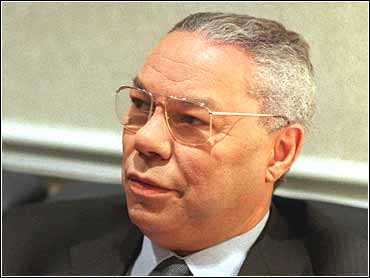 When the phone rings in his suburban Virginia home at 7:15 a.m. each morning, Colin Powell knows it's the informal start of his official business day.

That's when the nation's 65th secretary of state goes over the most pressing foreign and national security problems facing the Bush administration with Secretary of Defense Donald Rumsfeld and the Director of the National Security Council, Condoleeza Rice.

They discuss schedules, talk about foreign leaders who may be visiting Washington and catch up on the most important events which have occurred while officials in Washington slept.

If a problem is important enough, of course, Powell was likely up during the night, on the phone with an ambassador dealing with foreign ministry officials half a world away. Such was the case when a U.S. Navy spy plane made an emergency landing at a Chinese military airfield in March.

Middle of the night phone calls to Israeli and Palestinian leaders also have become an indicator of how much time and attention that problem requires.

If he desires, Powell can always be in touch with the Operations Center at the State Department, which is manned 24 hours a day, 7 days a week.

And there's always the Internet. Powell often logs on first thing in the morning, according to aides. When he met with State Department employees just after becoming secretary of state, Powell eagerly recommended his favorite Web site, www.refdesk.com.

In his office before 8 a.m., Powell is briefed in more detail by a CIA official before he convenes his senior staff at 8:30 a.m. Some mornings include a breakfast meeting with a fellow foreign minister who is visiting Washington.

After Powell has heard from his top people the schedule varies, but usually includes meetings with visiting dignitaries — Powell has met with more than 130 presidents, prime ministers, foreign ministers and other international leaders in his first four months-at the State Department or the White House.

Often, Powell will escort his guest to the department's front door where they'll make statements and take a question or two from the press. This serves Powell's purposes, because he can be almost assured his comments will be carried on TV in his visitor's capital, meaning it's a way to get his message out.

The press is also generally happy with such appearances because reporters have a chance to ask about whatever topic is in the news that day.

In between meetings and appointments, there's other official business. As Powell so often has told Congress, in addition to conducting the nation's foreign policy, he's also CEO at State.

There is problem after problem to be dealt with: keeping the cost of new embassy buildings down, getting improved Internet access for all 260 posts abroad and selling foreign policy to the American public — especially to Congress.

Around 6 p.m. Powell has another meeting with senior staff, going over the day's business and keeping an eye on what's ahead.

In the evening, aides say, he attends or hosts those social events that he must. Otherwise, Powell prefers a quiet evening at home with his family.

As he leaves his office each evening, the secretary of state takes his "homework" with him. Using a slang expression from his former life in the army, an aide says of Powell: "He was always a bag dragger. Now he's a two bag dragger."