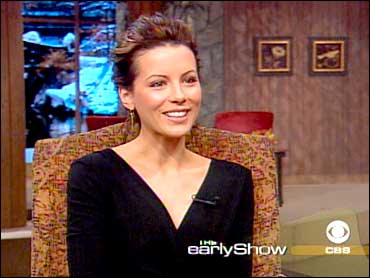 Kate Beckinsale has dazzled us with her stunning looks and charming characters in movies such as "Pearl Harbor," "Serendipity" and "The Aviator."

But the British beauty refuses to be typecast, as she proves once again in her new movie, "Underworld: Evolution." Beckinsale reprises her 2004 role of a vampire assassin, in a centuries-old war with the Lycans (werewolves). Things get even more complicated when her character, Selene, falls for the wrong man.

She tells The Early Show she thinks the first "Underworld" movie was popular because "the story was complex and unusual. And I think people just ran off with it in a way that we didn't anticipate."

In the movie, her love interest is a former medical student who has been bitten by several creatures, becoming a powerful hybrid.

"So we end up sort of thrown together and we're a team then," the actress explains.

The movie involves a lot of fantasy and a lot of fighting.

"It's totally fun," says Beckinsale. "The very first movie, the most interesting thing I had ever done was be a Brownie, a Girl Scout."

As she read the script of the first movie, she says, she asked herself if she could pull it off. "Can I take myself seriously with a little bit more edge? It was liberating going through all the training and having to use your body in a very different way than I've had to before."

She wears a tight black suit in the movie, but she says it wasn't uncomfortable. The tightness of the costume, she says, "does help you. It does sort of suck everything in and hold things in place. It's not that bad."

She is now married to Len Wiseman, whom she met when he was directing the first "Underworld" movie, which he also wrote. During the filming of the first movie, she admits, "I was intimidated because he was from that whole genre. He really knows about that stuff. I'm a ballet girl from London. So, this time, I had a better idea what was going on and for him, it was easier: 'In this scene, your character will probably be looking down.' In the second movie, he'd say, 'You look a bit piggy. Can you put your chin down? Looking up your nose or your face is a bad angle.' He was a bit freer as well."

Also, for the second film, they made more use of Beckinsale's body double to cover some of the more dangerous stunts.

"He still tried to push me off as many things as he possibly could," quips Beckinsale. "There was just this one really dangerous and he'd asked me to jump off a giant cliff. He got cold feet before I did. I am sure I would have gotten cold feet."