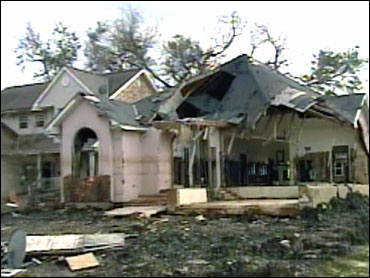 For the Bourgeois clan, once residents of the Lakeview section of New Orleans, the only thing that's certain is more uncertainty.

The Early Show co-anchor Harry Smith met some family members as they briefly reunited and again hashed through the many problems they face in the aftermath of Hurricane Katrina.

As parts of New Orleans begin to come back to life, and the famous French Quarter revives, much of the hard-hit Lakeview neighborhood, once among New Orleans' prettiest sections, is still vacant and silent.

About 30 homes in Lakeview belonging to the large and extended Bourgeois family were flooded during Hurricane Katrina and are still uninhabitable. The family, which traces its New Orleans roots back to the 1700s, is scattered around Louisiana in temporary lodgings.

The family was briefly reunited last weekend for a wedding. The event was a silver lining to a long spell of bad weather.

"I've been looking forward to this for so long," said family member and Lakeview homeowner Cathy Ritter. "That storm's always in the back of your mind" but for a few hours, she adds, "we can break away from it for a little bit. Live a while. Live again."
Longer term, the family's hopes are centered on returning to Lakeview. They are all deep in battles with insurance companies and federal agencies regarding the damage to their homes. But none of those battles are likely to be completely resolved until the federal government decides how and whether to undergo the massive and costly effort to rebuild the levees to withstand future storms.

"A category 5 levee system would bring a lot more people back; a lot more people," noted one woman, referring to the safest and most expensive solution, a system built to withstand maximum hurricane force. "This street never flooded before. This was the first time we had a flood, and it's all because of a levee."

Adding to the general frustration among Lakeview residents is discomfort with public statements made — but then quickly retracted — by Mayor Ray Nagin, who said New Orleans would be rebuilt as a "chocolate city." "This city will be a majority African-American city," the mayor said. "It's the way God wants it to be."

The mayor quickly apologized for his remarks, saying they were "totally inappropriate" and that he had gotten caught up in the moment.

The comments underlined sensitivities and frustrations among neighborhoods and races in New Orleans. In the mostly African-American ninth ward, poorer residents are fearful that they will be shortchanged in rebuilding efforts. In mostly white neighborhoods, some feel that their needs have been overlooked.

"God bless the ninth ward; God bless all those people," said one Lakeview resident. "But we're important here, too!"

The weekend wedding, however, was a reminder of a better side of life, even in the aftermath of a storm.

"I'd like to say, throughout the storm we became closer as a family," said one woman. "We have two teenage daughters, and they don't ever have the opportunity to be around their grandmother and their aunt, and it's wonderful for them. We laugh and joke. (Having) generations living together has been a wonderful thing."