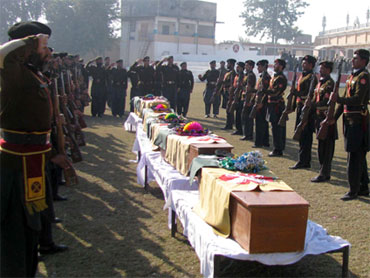 With the death toll still rising, and with at least 96 people dead, the people of Lakki Marwat are planning for a mass funeral this afternoon.

In the rubble of yesterday's bomb blast, local residents are still finding the bodies of victims - volleyball players and spectators - killed in this latest attack carried out by Pakistan's Taliban, reports CBS News correspondent Sheila MacVicar.

The police say they believe these people were not the intended targets.

The bomber wanted to attack tribal elders opposed to the Taliban, but could not reach the mosque where they were meeting.

Instead, he drove his SUV - packed with more than 500 pounds of explosives - into a field crowded with people watching a volleyball tournament.

The massive explosion leveled as many as 20 buildings.

The attack on the outskirts of Lakki Marwat city was one of the deadliest in recent Pakistani history and sent a bloody New Year's message to Pakistanis who dare take on the armed Islamist extremists.

As villagers in Shah Hasan Khel held funeral services and rescuers searched rubble for more bodies, many in the area were too terrified to speculate on who staged the assault.

Lakki Marwat district is near South Waziristan, a tribal region where the army has been battling the Pakistani Taliban.

Since October, when the army launched a major offensive against militants, more than 500 civilians have died as the Taliban have fought back with terror attacks across the country. Analysts say the army has not yet gone far enough.

"You can't just go in killing its leaders and hoping the system will improve," Sajjan Gohel of the U.K.-based Asia Pacific Foundation told CBS News, "because they are simply replaced. Unless the infrastructure is totally dismantled, this problem will continue to proliferate."

Across Pakistan's northwest, where the police force is thin, underpaid and under-equipped, various tribes have taken security into their own hands over the past two years by setting up citizen militias to fend off the Taliban.

The government has encouraged such "lashkars," and in some areas they have proven key to reducing militant activity.

Still, tribal leaders who face off with the militants do so at high personal risk. Several suicide attacks have targeted meetings of anti-Taliban elders, and militants also often go after individuals. One reason militancy has spread in Pakistan's semiautonomous tribal belt is because insurgents have slain dozens of tribal elders and filled a power vacuum.

Shah Hasan Khel village "has been a hub of militants. Locals set up a militia and expelled the militants from this area. This attack seems to be reaction to their expulsion," local police Chief Ayub Khan told reporters. 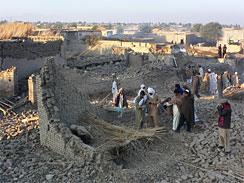 (AP Photo/Ijaz Muhammad)
Footage on private TV channels showed villagers gathered Saturday to say funeral prayers as covered bodies lay before them. Piles of beige mud-bricks were nearby, what was left of some three dozen homes toppled by the massive blast.

Mohammed Qayyum, 22, tried to avoid crying Saturday as he recounted how his younger brother died when the explosion shook the neighbourhood. His family's house was damaged.

"After the blast, I heard cries, I saw dust, and I saw injured and dead bodies," said Qayyum, who escaped injury. "See this rubble, see these destroyed homes? Everybody was happy before the explosion, but today we are mourning."

Like many others in the village that had prided itself on standing up to the militants, Qayyum refused to comment when asked who he thought was behind the bombing.

Mahmood Shah, a former security chief for Pakistan's tribal regions, described the attack as a big blow to Pakistanis resisting the Taliban, but noted past militant strikes had not stymied the resistance.

"I'm sure that even with this blow it will not make much difference to the resolve of the people to fight the war on terrorism with their own means," Shah said.

"The United States will continue to stand with the people of Pakistan in their efforts to chart their own future free from fear and intimidation and will support their efforts to combat violent extremism and bolster democracy," she said in a statement.

Authorities said about 300 people were on the field at the time of Friday's blast and security had been provided for the games and the tribal elders' meeting. Local administrator Asmatullah Khan said Saturday that 90 bodies had been identified, while six remained unknown. Thirty-six people were being treated at nearby medical centres.

Omar Gull, 35, a wounded paramilitary soldier, said the attacker drove recklessly into the crowd and people were trying to figure out what was happening when the explosives detonated. "It was then chaos," he said.

The attack was one of the deadliest in years, and the second deadliest since the latest wave of bloodshed began in October. A car bomb killed 112 people at a crowded market in Peshawar on Oct. 28.