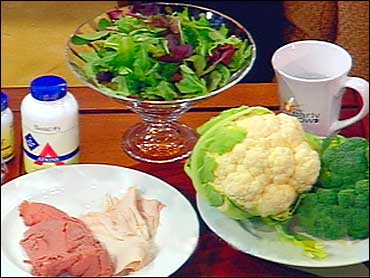 Some doctors are raising a red flag about the safety of the popular, high protein, low-carb Atkins diet.

Dr. Neal Barnard, a representative for the Physicians Committee for Responsible Medicine (PCRM), explains on The Early Show that new survey and data of previously unreported health problems raises questions about the safety of the Atkins Diet and other high-protein, low-carb weight-loss plans.

He says," This morning, we're reporting two deaths. One is the 16-year-old girl who wanted to lose some weight and went on a popular low carb, high fat, high protein diet, collapsed in school and died suddenly. Autopsy showed a massive abnormality in the heart.

"Another case, a 41-year-old man, no prior history of heart disease, collapsed suddenly and the same thing, the autopsy showed a massive heart malfunction. A third case, a man happened to have a heart scan prior to going on the diet and he got a clean bill of health, but after about two years on this popular low-carb diet, developed chest pain, had stress test changes and angiogram that showed a massive blockage in the heart."

People claiming to have been harmed by high-protein diets reported health problems on a PCRM's Web site registry. The online registry found: