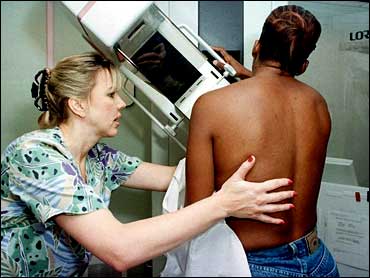 A major effort to teach self-examination so women could detect early, small lumps of a developing breast cancer did not reduce the rate of breast cancer deaths, suggesting the technique is a waste of time for doctors and patients, according to a study of more than 260,000 women in China.

"In spite of the fact that we spend all of this time and effort in teaching breast self-exam, the women were not able to detect lumps early enough to make a difference," said Dr. David Thomas, lead author of a study appearing Wednesday in the Journal of the National Cancer Institute.

Thomas, a researcher at the Fred Hutchinson Cancer Research Center in Seattle, said the study, in Shanghai, does not mean that women should stop breast self-examination but that they should not have unrealistic expectations about its value.

"If a woman chooses to do BSE, then she's got to do a very good job and she's got to realize it is unproven," said Thomas. He said most important is not to "rely on BSE as a substitute for mammography."

In poorer countries, where mammography is not routinely available, Thomas said the study suggests that public health officials should not spend their limited money on teaching BSE but on other programs, such as immunizations.

In the United States, where mammography is common, doctors should not emphasize breast self-examination, he said.

"Unless a woman is highly self-motivated, I wouldn't push it on her because it may be a waste of time," Thomas said.

Other experts, however, said the study will not affect their continuing recommendation that women perform self-examinations between their regular routine breast screening tests.

"It remains important for women to be familiar with their own anatomy, and certainly teaching signs and symptoms of cancer is of value," said Dr. Benjamin Anderson, a breast surgeon and the clinical medical director of the Breast Care and Cancer Research Program at the University of Washington. "We will continue to recommend monthly self-examination as part of routine breast health care. We will not be abandoning that aspect."

Anderson said many instances occur in which self-examination by women picked up cancers and "got the process (of treatment) started."

Dr. Kimberly Van Zee, breast cancer surgeon at the Memorial Sloan-Kettering Cancer Center in New York, said the study did not determine self-examination to be of no value, but teaching the procedure as a broad public health measure may not be useful in countries where mammography and other breast cancer screening exams are not available.

"Among motivated women who do regular breast self-exam and are very proficient at doing it, it might make a difference, but this study did not test that," Van Zee said.

"My approach is not to discourage a patient from doing breast self-exam," she said. "But it needs to be reinforced to a patient that BSE is not a be-all and end-all. She needs to have other screening done on a regular basis."

An editorial in the cancer journal by Drs. Russell Harris and Linda Kinsinger of the department of medicine at the University of North Carolina at Chapel Hill said the study "should lead us to change our clinical practice."

American physicians, the editorial said, "can stop spending time routinely teaching women's fingers to do BSE" and, instead, concentrate more on clinical examinations for breast cancer.

Thomas said that, in theory, self-examination should find small breast cancer lumps at a point when they could be treated easily and eliminate the cancer threat. Despite a major effort to teach the Shanghai women and to monitor their self-examinations, the researchers found as high a level of cancer deaths among patients trained in self-examination as among those who did not receive the training.

In the study, researchers randomly assigned half of about 266,000 women factory workers in Shanghai to one of two groups. Women in one group were all trained to perform the examinations properly. They received monthly reminders, then conducted the exams under medical supervision every six months for five years. The second group of women received no information on breast cancer screening.

"The differences are not statistically significant," the study said.

Women who examined their breasts found more benign lumps that required medical attention, said Thomas, but there was no reduction in the rate of breast cancer.

Despite the study, Thomas conceded that "highly motivated women" could benefit from self-examination practiced between regular breast cancer screenings. But he said such patients should be aware that the survival benefit of the procedure is unproven, and the technique does increase the chances of having a breast biopsy that does not find cancer.