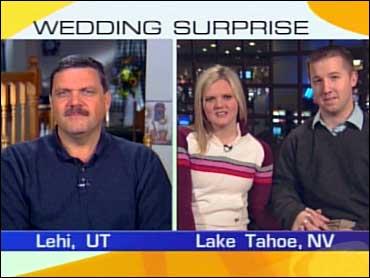 A wedding surprise to beat all others: A military dad serving in Iraq had told his daughter he couldn't make it home for her wedding.

At the last minute, just as Tessa Flitton was walking down the aisle, this Saturday, Nov. 15, there her father was, shocking the bride and most of the wedding guests.

David Flitton, a Utah National Guard member on duty in Iraq since January, stepped in at the final moment to escort Tessa down the aisle.

"I think I'll take it from here," he told his brother and stand-in, Lawrence.

His daughter Tessa tells The Early Show co-anchor Harry Smith, "I was really nervous and i was trying to concentrate on what I was supposed to do. And like, all of a sudden, he just kind of appeared and it was like amazing. I was so overwhelmed. I just started crying because I wanted him to be there so bad."

The astonished bride gasped, put her hand to her mouth to suppress a scream and started crying. Father and daughter embraced. Neither knew what to do next.

Tessa Flitton says, "My mom was, like, 'Take his arm, take his arm!' I think she was afraid that I wasn't going to start walking down the aisle because I was crying."

Wearing a dark green class A uniform with a white shirt, black bow tie and a huge grin, Staff Sgt. David Flitton walked his happily sobbing daughter to the front of the hall where she and Brandon McClellan were married.

He says, "I was very proud of her at that moment that she was willing to get attached to a man for the rest of her life and I was so proud to be there with her, and so proud of my wife to help me get this moment all set up together."

David Flitton, a member of the 142nd Military Intelligence Battalion, almost didn't make it home. Military transports out of Baghdad, where he is stationed, were booked for months. He was told he could go on a commercial flight out of Kuwait or Qatar.

He explains, "I was very disappointed that i couldn't go. I couldn't afford a ticket from Qatar to Salt Lake City, so I told my wife I couldn't come."

The Flittons didn't have $1,159 for the round-trip airfare. David Flitton has been unemployed since the computer firm he works for was bought out just before he was called up.

Hearing about the family's plight, two of Renee Flitton's co-workers, Julie Summers and Shirley Pas, flooded colleagues with e-mails. They raised more than $1,500 in an afternoon, with people giving anywhere from $1 to $100.

David Flitton says, "The rest was very easy for me to do. It was getting the leave papers done and my commanders' signature on the block where it needed to be. It was a quick trip, 36 hours on the road, and I was glad to finally be here in Salt Lake."

David Flitton arrived Tuesday. But his wife managed to keep him under wraps from other family and wedding guests until Saturday.

He says, "Renee had arranged for me to give a late night pep talk to our daughter before the wedding so we used a calling card from our home phone - that way, she couldn't trace the number to where I was calling from. I pretended I was still in Baghdad, which wasn't too hard. My mind is still back there."

So what does the groom say about his in-laws?

"I love it. They're a lot of fun," says Brandon McClellan. He also had no idea about their plan. He says, "I was just kind of standing there. I saw her and she was looking beautiful and, all of a sudden, this man in a uniform came out of nowhere and my heart kind of stopped. Her face kind of fell into his chest and they kind of stood there for a minute. It was amazing."

The newlyweds left town for their honeymoon. Tessa Flitton says, "It was kind of hard to leave, but I wanted to go to Tahoe real bad."

David Flitton isn't due back in Iraq for a week so the two will have some time to spend together after the newlyweds return Thursday.