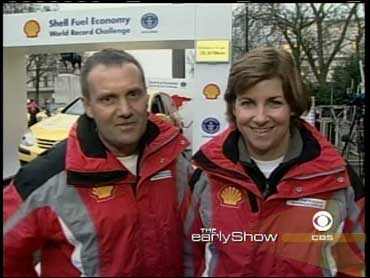 We all know what it's like to be on a long road trip. But imagine one lasting more than two months and imagine spending all that time with your significant other.

As CBS News correspondent Charlie D'Agata reports, it's a world-record challenge a British couple — John Taylor and his wife, Helen — are embarking on.

The challenge is to go around the world on 50 tanks — all the gas they'll get as part of a Guinness World Record attempt.

They're using a special energy-efficient fuel, and they'll probably try to coast on fumes for as long as possible.

"I save 15 to 20 percent fuel money every week purely and simply by using a few simple tips," John Taylor said.

His tips include keeping junk out of the trunk and avoiding rush hour traffic. So what does Mr. Wonderful do with the extra dough?

"I love my wife, so I give that money to my wife. She gives it to the kids and the kids go out and waste it," Taylor said.

If all goes as planned, the couple will arrive in central London 10 weeks from now.

But the big question is, after such a grueling journey and all that wear and tear — will the marriage make it?

At the televised launch, even before mile one, a bit of bickering had already begun. Interrupting his wife, Taylor says, "Let me tell you something. Sorry to be rude, but I think we're going to do it on less than 50 tanks."

"To be a fly on the wall as they argue during the drive," said the presenter.

Nah, not them. Helen says it'll be like a second honeymoon and Taylor says they'll have time to "catch up" and perhaps listen to a smattering of Barbra Streisand.

Well, good luck with that. We'll see you back here in late March — breakdowns of all manner, pending.