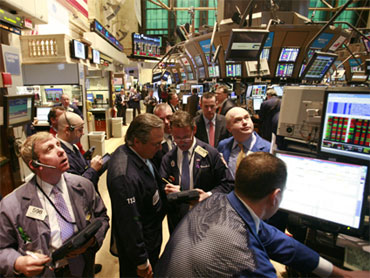 What a difference a year makes.

With Wall Street closing yesterday at 10,552, CBSMoneywatch.com editor-at-large Jill Schlesinger said the Dow Jones Industrial Average is up over 61% over the past year.

"That is the best one-year since the Depression, the best 12 months," she said on CBS' "The Early Show" this morning, also noting that the Nasdaq is up 83%, and Standard & Poors is up 68%.

Schlesinger said the sectors which recovered most in the last year were business services (publishing, advertising, consulting) up +210%; media business ("thankfully for us!") up 138%; and a 155% jump in financial services - "all those taxpayer-bailed out companies, the banks, the mutual fund companies, the big insurance companies," she said. "To me that's pretty amazing."

But she acknowledged that with that gain came pain, on the backs of taxpayers.

"So it sort of stinks on one hand, but we're happy a year later that things have stabilized," she said."

"Part of that has to do with us putting more money in, but that's also a sign of confidence," she said. "Part of it was market growth. Those are really good numbers. We're happy to see that trend."

Schlesinger's advice for the next year?

"Number one, look at the last year. Don't get emotional. It's never as good, or as bad, as you think it's going to be.

"And one way to guard against your emotions and not fall prey to fear, or to greed, is to take a risk assessment questionnaire. Go to your 401(k) plan provider, any mutual fund company, you take a test. It says 'How did you feel' at the bottom. 'How are you feeling now? When do you need your money?' Those questions help you create a diversified portfolio.

"So don't be a hero: Get a good night's sleep, don't panic, don't fall prey to your emotions, chill out."