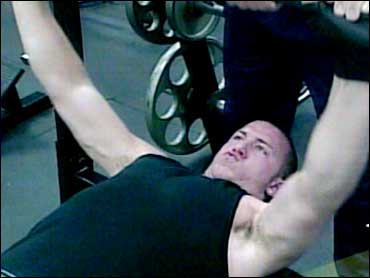 You still aren't going to hear a teenage guy ask, "Does my rear end look big in this?" But yes, just like us gals, CBS News Correspondent Tracy Smith reports, more and more boys want to change what they see in the mirror.

Though you can hardly tell by the look on his face, 16-year-old Kyle McKendrick likes spending time with dumbbells.

"I'm reaching for a goal -- to get big. So I guess I got to put in the time," says McKendrick, who lifts weights one and a half hours a day, five days a week.

And big for him, he says, is enough "to be able to impress girls and get compliments, 'Oh you have a nice body.' Or stuff like that."

But he's got some competition.

According to industry reports, the number of Americans younger than 18 who belong to health clubs hit 4 million last year - a 97 percent increase over the last decade.

A kid in the gym tells Smith, "Last year when we were in middle school, you didn't really see a lot of guys, you saw a lot of scrawny guys who were little. We'd pick on them a little bit. But I guess they've started bulking up now."

And more and more high schools, like Packer in Brooklyn, N.Y., are installing state-of-the-art gyms right on campus.

"People think that, like the best kind of guy, is a buff guy so they kind of want to be like that," adds another kid.

The No. 1 thing that teenage guys ask for when they come to Tarek Hasseib's gym in New Jersey is abs. Just like girls, boys want to look like what they see on TV and on the newsstands, says Hasseib.

In fact, you might just call it an ab-session. And that has some child behavior experts worried.

"What's bad for you is to think that your body is who you are," says Avril Rosenfeld, an adolescent psychiatrist.

Dr. Rosenfeld says boys are starting to suffer from the same body-image issues that have plagued girls for decades: "They feel they're not adequate. They need to be made adequate so if my muscles are big enough then I'm big enough."

But wait a second. What about the childhood obesity epidemic? Millions of kids are risking heart disease, diabetes and high blood pressure because they're too heavy. And some say we should be applauding kids who want to be gym rats rather than couch potatoes.

To Kyle, it's all good. Since he started lifting seriously last year, he's gained 20 pounds, and a girlfriend.

"I guess I feel more confident now because I feel stronger," he says. "I feel better about myself."

The main concern here is that kids with a weightlifting obsession will start taking shortcuts, like steroids. So experts say if your son or daughter is hitting the gym a lot, make sure you have a conversation with them. Also, know the warning signs of steroid abuse: rapid weight gain, hostility, and severe acne.