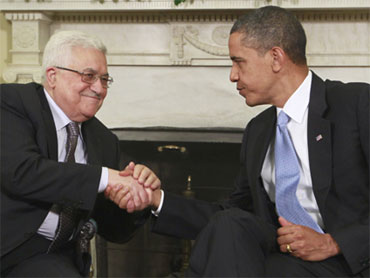 The Palestinian president said Tuesday he will seek active U.S. mediation in negotiations with Israel that are resuming in Washington this week.

President Barack Obama is hosting Mahmoud Abbas and Israeli Prime Minister Benjamin Netanyahu at the White House to kick off the first direct talks in nearly two years. Obama has said he hopes to see a peace agreement within a year.

Abbas told reporters accompanying him to Washington that the deadline is reasonable because many of the issues have already been discussed in previous rounds.

"If there is goodwill, then it is more than enough," he said. "Everything is clear."

However, Netanyahu has not agreed to pick up where negotiations left off in December 2008 between his predecessor, Ehud Olmert, and Abbas.

Abbas said he hoped for an active U.S. role in the talks. He said that when the two sides reach a deadlock, the Obama administration should "present proposals to bridge the gap between the two positions."

Israel's outgoing U.N. ambassador, Gabriela Shalev, discussed the upcoming peace negotiations with CBS Foreign Affairs Analyst Pamela Falk, and said, "Iran presents an obstacle and a threat to the whole world, not only to Israel ...and I am sure that they will try to prevent or stall the peace process."

But Shalev said that the negotiations will succeed, in part because of the chemistry between Mr. Obama and Israeli Prime Minister Netanyahu and in part because all sides want peace.

The timetable may not be a year, Shalev said, saying that Middle East timetables were not like Swiss watches, but she said that the talks will bear fruit, regardless of the fact that Hamas will not play a role.

Abbas wants to establish a Palestinian state in the West Bank, Gaza and east Jerusalem, territories Israel captured in the 1967 Mideast War. He has agreed to minor border adjustments that would enable Israel to keep some of its largest West Bank settlements, while compensating the Palestinians in a land swap.

Netanyahu has endorsed the idea of a Palestinian state in principle, but that Israel will not give up east Jerusalem, the Palestinians' intended capital.

Abbas, meanwhile, warned that the talks could be derailed if Netanyahu fails to extend a 10-month curb on settlement extension that expires Sept. 26. "If they refuse to extend the halt of settlement activities, then it will be difficult for us to continue the negotiations," Abbas said.

Netanyahu has not committed to such an extension, but he is under pressure from hawkish coalition partners to resume construction.