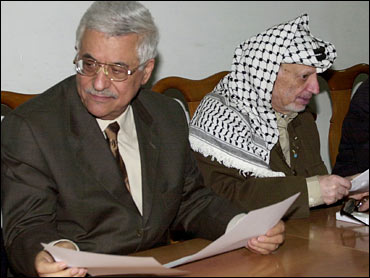 Palestinian Prime Minister Mahmoud Abbas now has something Yasser Arafat never got: An invitation to meet with President Bush in Washington.

Abbas' office said the visit will take place July 25. U.S. officials have confirmed that Abbas will be in Washington in late July.

Meanwhile, Israel's military confirmed Wednesday that major Palestinian militant groups were not behind the kidnapping of a taxi driver who was freed in a midnight commando raid.

The abduction last week of Israeli Eliyahu Goral, who was rescued late Tuesday, raised tensions as Israelis and Palestinians have worked to maintain a fragile cease-fire declared June 29.

Abbas said in the statement that the main subject of the talks would be promoting the U.S.-backed "road map" peace plan, which calls for an end to 33 months of Palestinian-Israeli violence and leads through three stages to creation of a Palestinian state in 2005.

He said the key issues would be stopping Israeli settlement building in the West Bank and freeing Palestinian prisoners held in Israeli jails, according to the statement.

Up to now, Abbas has refused to travel abroad until Israel lifts travel restrictions on Palestinian leader Yasser Arafat, confined to his West Bank headquarters in Ramallah for a year and a half.

The Israeli army said Goral's kidnappers had no ties to the larger Palestinian militant groups, but may have sought to turn Goral over to them.

The military insisted the kidnappers were not common criminals.

"We know for sure that the motives for the kidnapping were (terrorist) motives," an Israeli army colonel told reporters on condition he only be identified by his first name, Uzi.

Sharon, on a brief visit to Norway, applauded "a very successful operation."

"There is no possibility of compromise with terror," he said.

Goral's rescue eased fears the cease-fire could collapse, after a Palestinian group claimed responsibility for the fatal stabbing of an Israeli in Tel Aviv and Israel's foreign minister warned that Palestinian officials were running out of time to disarm militants.

Palestinian Information Minister Nabil Amr minister, meanwhile, said the Palestinian Authority would disarm anyone brandishing or using weapons and was seeking to persuade the militant groups to extend indefinitely the temporary halt to attacks against Israelis.

Abdel Aziz Rantisi, a top leader of Hamas in the Gaza Strip, dismissed the idea.

"These are illusions," Rantisi said. "If (Amr) said this I want to tell him that there is no one who can give any inch from the land of Palestine" by permanently accepting the existence of Israel.

He had been missing since Friday night, when his taxi was found with its motor running in an Arab neighborhood of Jerusalem. Goral said he was kidnapped after he picked up two men, a young woman and a child in Lod, a mixed Jewish-Arab town just east of Tel Aviv.

"They had a little girl with them, otherwise I wouldn't have stopped," Goral said. He said the passengers asked him to take them to Jerusalem and when they arrived, he was ordered at knifepoint to drive to an Arab suburb.

From there, he was taken to the nearby West Bank town of Ramallah and held in 30-foot pit until his release, the army said.

Palestinian sources said the kidnappers had been in touch with militants from the Al Aqsa Brigades — a group linked to Yasser Arafat's Fatah movement — and sought help in demanding that Israel, in exchange for Goral, release about 200 Palestinian prisoners.

The sources, who spoke on condition of anonymity, said Al Aqsa refused to cooperate with the kidnappers, and that Palestinian Authority intelligence chief Tawfiq Tirawi had been in close contact with militants in the West Bank to urge them not to take any measure that could bring down the cease-fire with Israel.

Palestinian officials said that their security forces helped Israeli troops search for Goral. But Maj. Gen. Moshe Kaplinsky, head of the army's central command, said the Palestinians had not contributed to the release.

The kidnapping did not appear to be a professional operation. The abductors, armed only with a knife, issued no public demands or claims of responsibility.

The military said the break in the case came on Saturday night, when the female kidnapper, Shirin Halil, was arrested and provided information that led security forces to two other gang members and later to Goral.

When elite commandos stormed the hideout late Tuesday, Goral was guarded by a lone, unarmed kidnapper who tried to escape but was captured. Authorities also arrested an unarmed guard standing outside the building, but the extent of his connection to the abduction was unclear, the army said. No shots were fired and no one was wounded, the military said.

The kidnapping and rescue came as Israel voices increasing impatience with Palestinian Prime Minister Mahmoud Abbas' reluctance to disarm militant groups. Foreign Minister Silvan Shalom warned Tuesday that if the Palestinian Authority didn't move on the issue soon, "the whole thing's going to blow up in our face."

Shalom said that Israel and the Palestinians had an informal understanding that the Palestinians would have about three weeks after the cease-fire started to begin dismantling the militant groups, as required by a U.S.-backed plan that calls for an end to 33 months of violence and leads through three stages to creation of a Palestinian state in 2005.

The unilateral truce declared by Palestinian militant groups on June 29 has led to a significant drop in violence, allowing implementation of some of the initial steps in the road map — but there have been sporadic incidents, killing three people.