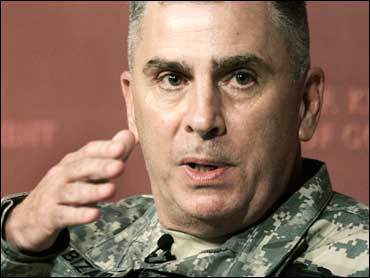 It will take three to five years before Iraq's government is stable enough to operate on its own, according to the former commander of U.S. forces in the Middle East, who said the surge of American forces has not solved the country's broader problems.

In an interview with The Associated Press, retired Army Gen. John Abizaid also said that beyond attacking the global threat of terrorism with military strength, the United States has done a poor job of applying the economic, political and diplomatic means to fight Islamic extremism.

"I don't blame it on any people," Abizaid said Tuesday. "I just blame it on a bureaucratic system that has been unresponsive thus far to the challenges of the 21st century. We need to change that as a matter of national priority."

Abizaid retired in May after nearly four years as the top officer at U.S. Central Command, the war-fighting organization based in Tampa, Fla. that oversees military operations in a region stretching from central Asia to the Horn of Africa. He was in Maryland to speak at a conference on military logistics.

The United States must draw down forces in Iraq so the Iraqis can take control of their own affairs, Abizaid said.

"I think in terms of time, Iraq stabilizes in the next three to five years," Abizaid said. "That means we need to adjust our presence according to the security situation."

Abizaid declined to assess Army Gen. David Petraeus' handling of the war in Iraq, saying that as a former commander he never appreciated being critiqued on decisions he made.

"The fact the Iraqis want us to go, we want to go, is one that none of us should ever lose sight of," he said. "We're trying to work ourselves out of a job. But we can't do it in a way that destabilizes the country and allows precisely the worst thing to happen, which is the country becomes an even greater safe haven for extremist groups such as al Qaeda."

While in uniform, Abizaid opposed a "surge" of U.S. forces in Iraq because he believed that simply building up military strength wouldn't solve the more deeply embedded problems.

"It was clear that putting additional troops in would gain temporary security," he said. "What was not clear to me was what we were going to do diplomatically, economically, politically and informationally to make sure that we moved forward in a way that wasn't just temporary."

"And it appears to me that those aspects, all designed to build better governments, haven't necessarily achieved the effect that people would have hoped for," he added.

In a prime time address Thursday, President Bush is to announce his plans to reduce the American troop presence in Iraq by about 30,000 by next summer, although he will condition the cuts on continued progress. The speech endorses Gen. Petraeus' plan.

Abizaid said none of the candidates hoping to replace President Bush can responsibly call for immediate or complete withdrawal of U.S. forces from Iraq and other trouble spots around the globe.

Too many other related issues are involved, he said, including the rise of Islamic extremism, the Arab-Israeli conflict, the proliferation of weapons of mass destruction, and the need to preserve the flow of oil from the Middle East. Abizaid called these major and pressing issues to be addressed.

"Any presidential candidate has got to face those facts as a matter of reality," Abizaid said. "The United States is the most powerful nation on Earth and it just can't walk away from the Middle East and central Asia and the Horn of Africa."

In 2009, when there's a new president, there will be an "opportunity to rebuild some of that international strength" that's been lost since the war in Iraq began in March 2003, he said.

But he declined to say how that global unity was lost.

"I'll just say that over time, especially with regard to Iraq, it's been very, very difficult to build an international consensus that was one that people could agree on," Abizaid said.