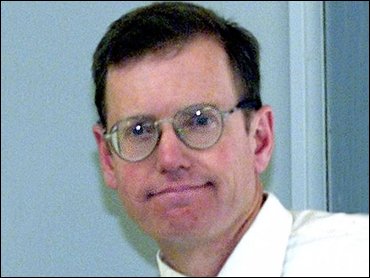 The anti-abortion activist suspected in the 1998 sniper slaying of a Buffalo abortion doctor was returned to the United States from France on Wednesday and pleaded innocent to federal charges. He faces more charges Thursday.

James Kopp, 47, became one of the FBI's 10 most-wanted fugitives after the shooting of Dr. Barnett Slepian. He was caught in France in March, ending a 2 1/2-year manhunt.

Kopp, who is jailed without bail, was scheduled to be arraigned Thursday on the state charge of second-degree murder, which carries a sentence of 25 years to life.

On Wednesday, Kopp was charged with federal charges of using deadly force to interfere with the right to abortion. He faces life without parole on the federal charges.

The Pasadena, Calif., native entered the courtroom Wednesday without handcuffs, wearing a button-down striped shirt. A church prayer book appeared to be in his back pocket. His lawyer, Paul Cambria, entered an innocent plea on his client's behalf.

Investigators say it was Kopp who hid behind Slepian's home Oct. 23, 1998, and killed the doctor with a single shot from a high-powered rifle fired through a kitchen window.

Kopp disappeared 11 days after Slepian's slaying, and his car was found abandoned at the Newark, New Jersey, airport. Authorities said the car was spotted in Slepian's neighborhood in the weeks before the doctor was killed.

In the months after the shooting, investigators found a scope-equipped rifle buried near the Slepian home. Law enforcement sources said DNA linked Kopp to a strand of hair found near where the sniper fired.

Kopp spent a year moving among hostels in Ireland until March 12, when, with police closing in, he moved to France. Police said he changed aliases frequently, obtained phony driver's licenses and passports and lost weight.

"It wasn't because he's guilty," Cambria said when asked why his client fled. "There is a very plausible and innocent explanation for his actions."

Last June, a French court recommended that Kopp be extradited after receiving assurances that the U.S. government would not seek the death penalty.

Assistant U.S. Attorney Kathleen Mehltretter said she agreed with the decision not to seek the death penalty.

"I think it's much more important to have Mr. Kopp tried in a court than for the government to have been able to go forward on the death penalty," she said.

In January 2000, Canadian officials issued a Canada-wide arrest warrant for Kopp in the attempted murder of Dr. Hugh Short, an abortion doctor shot at his home in 1995. Canadian police also want to question Kopp in the shootings of two other doctors in 1994 and 1997.

Kopp is due back in federal court July 25.