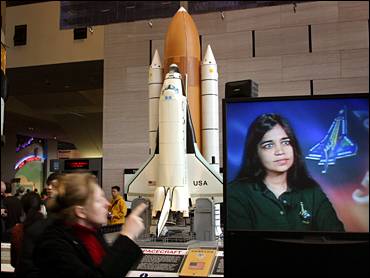 President Bush will attend a memorial service for the Columbia astronauts Tuesday in Houston.

It will be a private ceremony for family members, friends, and invited guests, along with NASA employees and contractors. The service will be carried live on NASA Television and available on the Internet, starting at 12:45 p.m. EST.

The Senate Monday morning quickly passed a resolution expressing condolences at the loss of the Columbia, reports CBS News Capitol Hill Correspondent Bob Fuss. The Senate then adjourned in respect to the astronauts and will stay out most of Tuesday so members can attend the memorial service in Houston.

"They would want us to determine the cause, to fix what caused (it), and then to move on in that same spirit of exploration," said Senate Majority Leader Bill Frist.

"They were, and are, heroes, role models, committed Americans, patriots and pioneers," said Senate Democratic leader Tom Daschle on the Senate floor Monday.

Lee Einbinder had planned to spend a leisurely day at home, but the Columbia tragedy brought him to a planetarium instead.

"This was the place we wanted to come to pay tribute," said Einbinder, a truck driver, who was at Chicago's Adler Planetarium with his wife and 7-year-old daughter. "I thought here she can see why they did what they did, why they take chances."

Visitors at the Adler Planetarium kept their voices down and their children close as television screens showed the Columbia's crew members smiling and talking about their mission.

Some also took comfort in the words of Sally Ride, the first woman in space, who kept an appointment to appear at a science festival.

"We'll pick up the torch the astronauts carried and carry it forward," Ride told 800 young girls and their parents at Sunday's event at the University of Central Florida.

Attendance was up at the Smithsonian's National Air and Space Museum in Washington, D.C., where visitors left flowers and candles.

The bouquets were accompanied by a copy of the Jewish holy book, the Torah, and handwritten messages. One note praised the crew for making the "ultimate sacrifice in the pursuit of knowledge."

Many came to have their picture taken beside a 12-foot-tall model of the Columbia and sign a condolence book. Spokeswoman Claire Brown said being at the museum helped visitors "connect in a tangible way."

"It kind of reminds you of how human everything is," said Frank Lanky, 18, a college student at Catholic University. "Yesterday reminded everybody how out of our hands it all is."

Flowers and a poster of the Columbia crew adorned the lobby of the Kansas Cosmosphere and Space Center in Hutchinson, Kan.

The space centers in Florida and Texas also drew mourners.

In Cape Canaveral, Fla., visitors stood quietly before the 51-foot high, 43-foot wide Space Mirror Memorial, which was built after the 1986 Challenger disaster. Others adorned a white fence in front of it with roses, daises, lilacs and tulips.

"May all your dreams continue," read a card on one bouquet of flowers.

On a T-shirt with the NASA fire rescue emblem, a handwritten note said: "Our tears are not only those of sorrow but also tears of pride. You will never be forgotten."

"It's good to grieve with others," Donan said. "I feel isolated at home, like you're all alone."

An Israeli flag and four balloons — blue and white, the colors of the flag — were hung in memory of Ilan Ramon, the first Israeli in space.

In Hawaii, Onizuka Space Center employees at Kona International Airport set up a small memorial with flowers and a photograph of the Columbia's crew. Nancy Tashima, the center's curator, said visitors to the museum included Claude Onizuka, whose brother, Ellison, died in the Challenger explosion.

"It kind of reopened the wound again," Onizuka said from his home in Kona.