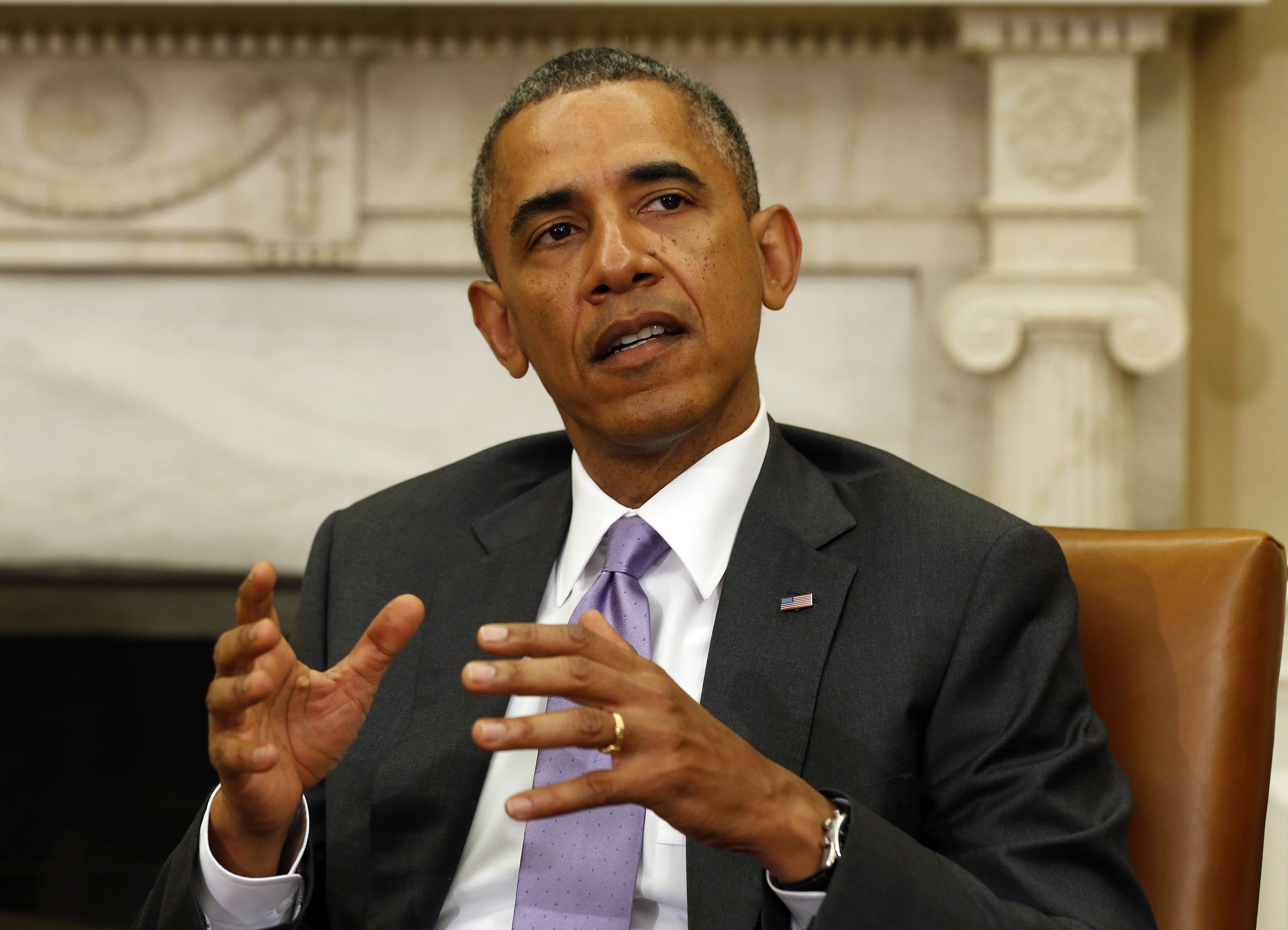 President Obama said Thursday he won't "rule out" any options to stem the growing violence in Iraq that has left an al Qaeda splinter group in control of two major cities and on a march to Baghdad.

"My team is working around the clock to identify how we can provide the most effective assistance to them," Mr. Obama continued. "I don't rule out anything because we do have a stake in making sure that these jihadists are not getting a permanent foothold in either Iraq or Syria for that matter."

But his comments will likely do little to stop Republican accusations that he bears responsibility for the current situation. Speaking with reporters Thursday morning, House Speaker John Boehner, R-Ohio, accused the president of "taking a nap" while extremists took control over western Iraq and the city of Mosul.

"It's not like we haven't seen this problem coming for over a year," Boehner said. "The administration's failed policies in Syria, Libya and Egypt and its failure to implement a broader strategy for the Middle East is having a direct impact on the situation in Iraq. The United States has and will continue to have vital national interest in Iraq but the progress made there is clearly in jeopardy."

He urged the president to provide equipment and technical assistance to the Iraqis.

Two of the Senate's most prominent hawks, Republicans John McCain of Arizona and Lindsey Graham of South Carolina warned that immediate action was needed. McCain, calling for "drastic measures" to be taken, suggested bringing back Gen. David Petraeus (who resigned as CIA director in the wake of a sex scandal) to the national security team and suggested a broad shakeup of the president's top advisers.

Graham said that "American air power is the only hope to change the question in Iraq," and that without any intervention, Baghdad is "definitely in jeopardy."

CBS News National Security Correspondent David Martin reports that there has been no decision to provide additional assistance or what it would look like, according to a Pentagon official. Although air strikes are being examined as one possible option, "we are no closer (to air strikes) today than yesterday," the official said.

But American intervention would likely face stiff resistance from congressional Democrats, many of whom rode their opposition to the Iraq War to take over the House and Senate in 2006.

"I don't think there's any appetite in our country for us to become engaged in any more military activity in Iraq," House Minority Leader Nancy Pelosi, D-Calif., told reporters. "The American people have been exhausted with wars."

Pelosi said the breakdown in order in Iraq might have happened with or without U.S. involvement because of the longstanding conflict between the Shia and Sunni denominations of Islam.

Mr. Obama echoed that assessment in his remarks, saying, that there had been insufficient trust and cooperation between the moderate leaders of the two groups.

"That accounts in part for some of the weakness of the state and that then carries over into the military capacity," he said. "There will be some short term immediate things that need to be done militarily, and our national security team is looking at all the options but this should be also a wakeup call for the Iraq government. There has to be a political component to this so that Sunni and Shia who care about building a functioning state that can bring about security and prosperity to all people inside of Iraq come together and work diligently against these extremists and that is going to require concessions on the part of both the Shia and Sunni that we haven't seen so far."

Sen. Carl Levin, D-Mich., the chairman of the Senate Armed Services Committee, similarly said that without a change within the Iraq government there was a limit to how far U.S. assistance could go.

"It's unclear how air strikes on our part can succeed unless the Iraqi army is willing to fight, and that's uncertain given the fact that several Iraqi army divisions have melted away. While all options should be considered, the problem in Iraq has not been so much a lack of direct U.S. military involvement, but a lack of reconciliation on the part of Iraqi leaders," he said in a statement.

The implications of the increasing violence - which have wiped out the security gains made by American forces during the war - will likely cast a shadow long in the future. Speaking at the Council on Foreign Relations in New York, former Secretary of State Hillary Clinton looked to pin the breakdown on the Bush administration.

"The deadline on Iraq was set by the prior administration," Clinton said, noting that Mr. Obama would have had to negotiate an agreement to keep troops in Iraq past the deadline. "When President Obama came in, he was obviously not an enthusiast about the Iraq War, from the very beginning, very strong critic of it, both its initiation and its handling. There was a lot of effort to work through with the [Iraqi Prime Minister Nouri al-Maliki] government what such a Status Of Forces Agreement would look like. At the end of the day the Maliki government would not agree so the decision was made, in effect. There could not be American troops left without such an agreement."