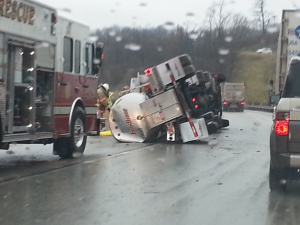 Troopers say the trucker lost control of the rig about 2 p.m. Thursday on Interstate 70 near Washington, Pa. The tanker truck went off the road, hit an embankment, rolled onto its side and slid, blocking both eastbound lanes.
Crews collected several hundred gallons of corn syrup in metal drums and put down anti-skid material to soak up what was left. Eastbound I-70 traffic backed up about 13 miles.
Interstate 79, which has an interchange near the site, had a southbound traffic backup of about 8 miles.
The driver, 52-year-old Billie Setser, of Carrollton, Ohio, was hurt, but police didn't release details.