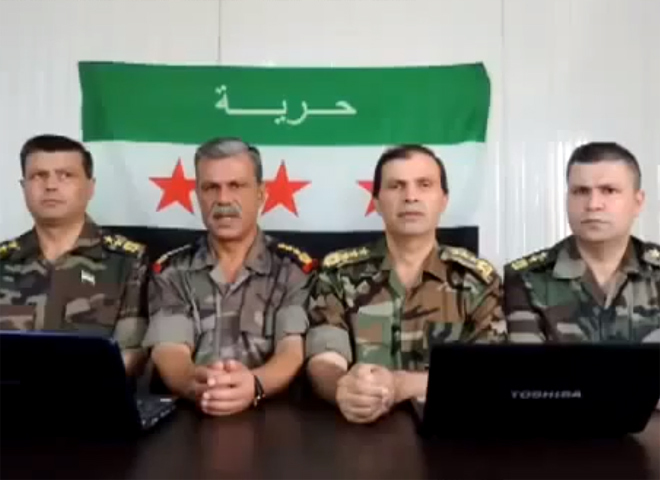 The Britain-based Syrian Observatory for Human Rights provided a video Friday purporting to show two brigadier generals and two colonels. They declared they were defecting.

Thousands of soldiers have abandoned the regime, but most are low-level conscripts. The Free Syria Army, the loosely-linked group of rebel forces, is made up partly of Syrian army defectors.

A diplomat present at the U.N. Security Council briefing earlier this week by the head of the U.N. observer mission in Syria, Major General Robert Mood, told CBS News' Pamela Falk on Wednesday that Gen. Mood had been surprised at the efficacy of the rebel forces, and to see that the majority of those forces appeared to be Syrian military defectors - including some at senior levels.

Mood said the opposition had clearly become better at fighting over the course of the past 15 months of the uprising, according to the diplomat.

The group said the defections came Thursday - the same day a Syria fighter pilot flew his MiG-21 warplane to neighboring Jordan, where he was given asylum.

The opposition consists of roughly 100 different groups, and as Secretary of State Hillary Clinton told Charlie Rose the U.S. is trying to organize them into a more unified force.

"We're also working very hard to try to prop up and better organize the opposition. We've spent a lot of time on that. It's still a work in progress."

The U.S, is not providing weapons to the insurgents, but Martin reports the CIA has begun advising other countries about which opposition groups should receive arms and money.

The Syrian government refers to rebels as terrorists.