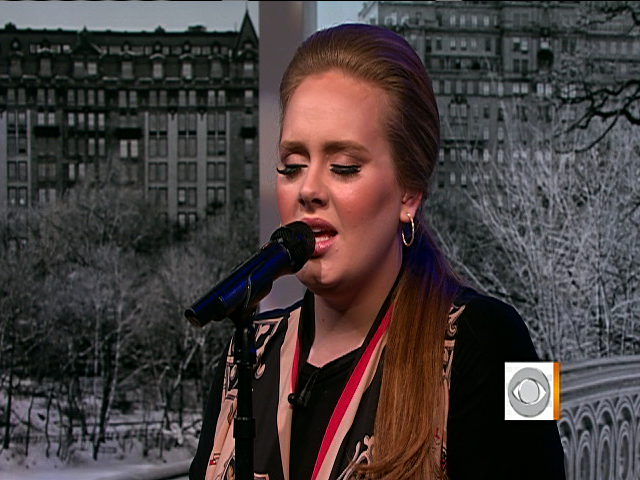 British singing sensation, Adele, who at 22 has already won two Grammys, has just released her second CD, called "21" which, as they say in the biz, has hit the charts with a bullet.

While it's no surprise, given her talent, Adele has continued to shine, following the tremendous success of her first album, "19."

This time around, Adele is really pouring her heart out -- "21" is based on a recent breakup.

Does her ex-boyfriend know he inspired an album?

"I'd imagine so! I don't talk to him. We're not friends," she tells "Early Show" co-anchor Chris Wragge. "That's why we're not together anymore. I imagine he probably knows, yeah. I haven't really been in the UK."

The vocal powerhouse doesn't get too deep when it comes to her album titles, however. She keeps it simple, to represent different stages in her life - her first album was "19" because she was 19 years old when she wrote the songs, and her latest album is "21" because she was 21 when the lyrics flowed out.

Will Adele continue this theme? After all, it's not always great for a lady to give away her age!

"Oh, I know," she admits. "I wasn't going to call this one '21.' '19' was actually on purpose. I feel a little bit like I'm kind of a train; I don't have much of an imagination with the age thing. But I had an amazing time when I was 21 and I changed in a million ways. So it happened again, so why not? It's obvious, but sometimes obvious is good."

Adele won two Grammys with "19," so why break away from a good thing!

With the royal wedding coming, will Adele take part in any of the festivities?

She will perform on "The Early Show" live in London for the royal wedding in April.

"I'm really looking forward to celebrating with you guys, because you look much more excited about it than we are in England, a little bit," she says. "So I can't wait!"

Does that mean Adele isn't that excited about it?

"Oh, I am. I love Kate. I think she's brilliant. I love William. Don't get me wrong. But I haven't been asked to do anything in the UK for that," she says. "Of course, I can't wait."