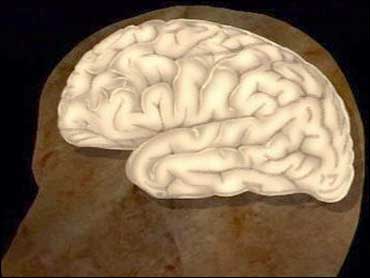 Hyperactive children and teens have slightly smaller brains than those without the disorder, a study shows.

Exactly why this is so is not clear, but the researchers said the smaller brain volume does not appear to be related to the use of hyperactivity drugs such as Ritalin, as some parents had feared.

The finding could be reassuring to parents in another respect as well: It suggests that hyperactivity is biological in origin, not a product of bad parenting.

The researchers said it appears that that the brains of hyperactive children develop at a normal pace but never entirely catch up in size with the brains of other youngsters. However, they said that people with smaller brains are not necessarily less intelligent.

The findings were reported in Wednesday's Journal of the American Medical Association.

Other studies also have suggested biological differences in the brains of people with attention deficit hyperactivity disorder.

"It's strong support for a very strong biological contribution to what causes ADHD," said one of the researchers, Dr. Judith Rapoport, chief of child psychiatry at the National Institute of Mental Health in Bethesda, Md.

The 10-year study used MRIs to look at 152 patients ages 5 to 18 who had the disorder, and 139 people in about the same age range who did not. It also compared patients who were on medication and those who were not.

The study found the disorder is associated with about a 3 percent to 4 percent decrease in volume throughout the brain. The smaller their brains, the greater their symptoms.

"The first thought people have is that this is a product of bad parenting" or that it is environmental, said Dr. Daniel Coury, a professor of clinical pediatrics at the Ohio State University College of Medicine who was not involved in the research. "Having clear biological findings that this is something beyond the control of parents or the child themselves helps to remove that stigma."

Dr. Bennett Leventhal, professor of psychiatry and pediatrics at the University of Chicago, said the findings regarding the effects of medication "should be reassuring to parents that you can treat your kids and not hurt their brains."

The research was conducted between 1991 and 2001 at the National Institute of Mental Health, which funded it.

ADHD is one of the most common childhood psychiatric disorders. Its symptoms include short attention span, impulsive behavior, difficulty focusing and fidgetiness. The American Academy of Pediatrics estimates 4 percent to 12 percent of school-age children are affected.