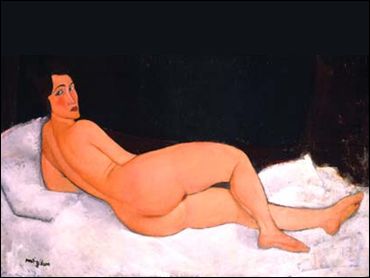 Modigliani's 1917 painting "Reclining Nude (on Her Left Side)" has sold for $26.8 million, a record for the artist at auction, Christie's said.

The work, offered at a sale of Impressionist and modern art that opened a two-week series of auctions, was the property of casino developer and art collector Stephen A. Wynn.

"Reclining Nude" was one of several in a collection of 19th- and 20th-century American and European masterpieces displayed at a gallery in the former Desert Inn resort, where Wynn is building a new casino-hotel.

Christie's would not say when Wynn bought the painting or how much he paid for it. The New York Times quoted experts saying Wynn had paid nearly $10 million for the painting when he bought it privately in the mid-1980s.

Tuesday's auction also drew a record sale for the cubist artist Fernand Leger, with a winning bid of $22.4 million for "Woman in Red and Green," painted in 1914. The painting had been looted by the Nazis in World War II and was returned to the heirs of its prewar owner only recently.

Three works by Vincent van Gogh, all painted in 1888, also sold. A rare watercolor, "The Bridge of Langlois at Arles," was sold to an unidentified buyer for $8.2 million. "The Alyscamps Allee," an oil of an ancient Roman cemetery, went for $11.7 million to an anonymous telephone bidder; and "Still Life, Almond Branch" sold for $4.3 million.