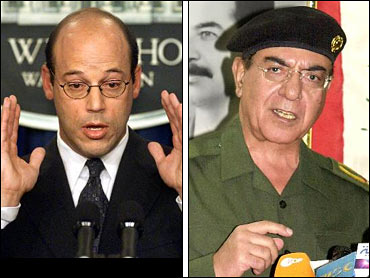 Ari Fleischer recently left his post as President Bush's press secretary. I started wondering what it might be like if he went on a well-deserved vacation and ran into another person who had had a similar job.

Ari is having a sandwich in a coffee shop in Las Vegas. Sitting next to him is the former Iraqi Minister of Information, Muhammed Saeed al-Sahaf — also known as Baghdad Bob.

ARI FLEISHER: I can't believe you spent the whole day out at the pool. It's 117 degrees out there.

BAGHDAD BOB: But it's dry heat. Besides, I'm used to it.

ARI FLEISCHER: I got pretty used to the heat, too.

BAGHDAD BOB: I guess it shouldn't surprise us that we both ended up here. I mean, we were in the same business.

ARI FLEISCHER: What?! You can't compare what you did to what I did! You were the spokesman for a leader who brought death and destruction to Iraq.

BAGHDAD BOB: And what do you think your boys were dropping on us — bagels?

ARI FLEISCHER: I don't have to defend what we did. We got rid of Saddam, didn't we?

BAGHDAD BOB: Did you?

ARI FLEISCHER: Tell me, Bob, how did you handle it when most of the world thought you were saying ridiculous things and well, to tell you the truth, they were laughing at you?

BAGHDAD BOB: No big deal. Just part of the job. How did you handle it?

ARI FLEISCHER: Very funny. But you have to admit, you made some pretty outrageous statements. Like, "Heavy doesn't accurately describe the level of casualties we have inflicted." And when Baghdad was falling, you had the guts to declare, "They are not even within 100 miles of Baghdad. They are trying to sell to others an illusion."

BAGHDAD BOB: You had some humdingers yourself. Like, when you said that if Saddam Hussein says he has no weapons of mass destruction, that obviously means that he's "misleading the world." Or how about when you had to pretend the administration was thrilled by the "powerful" countries that finally joined the coalition? By the way, did Iceland ever send its two soldiers?

ARI FLEISHER: Look, I thought then, and I still think that we were doing what was best for America and the world.

BAGHDAD BOB: Speaking of America, all my life I heard how evil America and Americans were. And now, when I look around me here, all I see is greed and decadence and women walking around barely clothed.

ARI FLEISCHER: That's just Las Vegas. If you don't like it, there are lots of other places in America you could visit.

ARI FLEISCHER: Did Saddam's government provide for your old age?

BAGHDAD BOB: Yes, they're letting me have one.

ARI FLEISCHER: So, do you want to go to a show tonight?

BAGHDAD BOB: Why not? Last night, I saw Engelbert Humperdinck. He was wonderful. The man is not just a singer, he's an entertainer. For tonight, how about Cirque du Soleil? I hear it's fantastic — dancing, juggling, impossible positions...

ARI FLEISCHER: Sounds too much like my old job.

BAGHDAD BOB: How about David Copperfield? Maybe he can make some weapons of mass destruction appear.

ARI FLEISCHER: We are going to find those weapons.

BAGHDAD BOB: I'm not so sure. You don't have a very good record when it comes to finding things — or people.

THE WAITRESS BRINGS THE CHECK. BOTH ARI AND BOB GRAB IT.

ARI FLEISCHER: Let me get it. Once I sell my book, I'll have plenty of money.

BAGHDAD BOB: If you insist. I have to admit, I'm having a hard time finding a new job. When most people hear my name, they think of someone who twists the facts and distorts the truth. Who's going to hire me?

ARI FLEISCHER: Have you tried the tobacco companies?