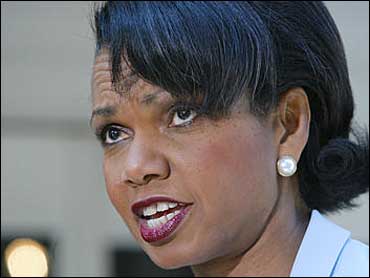 Administration officials insisted Sunday that President Bush's disputed statement about Iraqi uranium shopping in Africa was accurate, even while conceding anew it should have been deleted from his State of the Union address.

But both also said the intelligence falls short of the elevated standards necessary for a presidential address. They said CIA Director George Tenet had struck a similar but more narrowly focused assertion from a Mr. Bush speech in Cincinnati three months earlier.

Rumsfeld and Rice took identical messages to Sunday's television talk shows: the statement was and remains accurate; it was cleared for delivery by all necessary agencies; it was a minor part of Mr. Bush's speech; it is supported by more evidence than documents revealed earlier that were proved to have been forged.

Democrats jumped into the fray, with two presidential contenders questioning the administration's explanation. Sen. Bob Graham, D-Fla., said the suggestion that no one in the White House was aware of the weakness of the intelligence claim before the State of the Union speech "stretches belief."

The forged documents purported to confirm approaches by Iraq to Niger in West Africa, the world's third-largest producer of mined uranium. In the Jan. 28 State of the Union address, Mr. Bush said "the British government has learned" of the Iraqi approach, but he did not mention that U.S. agencies had questioned the validity of the British intelligence.

Asked during a broadcast interview to explain why the statement should have been dumped, Rumsfeld said: "Referencing another country's intelligence, as opposed to your own, probably — according to George Tenet and the president ... it would have been better not to include it."

Still, "The British stand by their statement," Rice said in a televised interview. "They have told us that despite the fact that we had apparently some concerns about that report, that they had other sources, and that they stand by the statement." U.S. officials have been denied access to the additional evidence, she said.

A former U.S. ambassador, Joseph Wilson, disclosed last weekend that his CIA-sponsored trip to Niger in February 2002 determined the intelligence could not be verified. A furor then arose in Washington, and questions about the speech dogged Bush throughout his five-day trip to Africa. On Friday, as Bush prepared to fly home, Tenet assumed responsibility for not having insisted that the statement be removed.

"These 16 words should never have been included in the text written for the president," the CIA chief said.

Mr. Bush affirmed his support for Tenet on Saturday and declared that the controversy was over. But the administration still sent Rice and Rumsfeld to the Sunday news shows to defend the speech.

"The statement that (Bush) made was indeed accurate," Rice said during a broadcast interview. "The British government did say that. Not only was the statement accurate, there were statements of this kind in the National Intelligence Estimate," a classified document compiled by U.S. agencies, she said.

Speaking of the clamor that has arisen over the statement, Rice said: "It is ludicrous to suggest that the president of the United States went to war on the question of whether Saddam Hussein sought uranium from Africa. This was a part of a very broad case that the president laid out in the State of the Union and other places."

In the four months since the war in Iraq began, U.S. forces have not found any weapons of mass destruction in Iraq. Rumsfeld said Sunday he remains confident such weapons will be found.

Graham, the senior Democrat on the Senate Intelligence Committee, said during a broadcast interview that Vice President Dick Cheney personally had asked for a CIA review of the Iraq-Niger link.

That he got no response, Graham said, "I will have to say that stretches belief ... The idea that he did not get a report back, and that that report did not contain the recommendations of Ambassador Wilson? I think I've got some swampland to sell to you."

Another Democratic hopeful, Sen. John Kerry of Massachusetts, disputed in a televised interview Bush's contention that the episode is finished.

Instead, Kerry said, there remain "enormous questions still about the overall intelligence given to the Congress, the quality of that intelligence and even about the politics that entered into the judgment of taking that famous phrase out of one speech but leaving it in another."