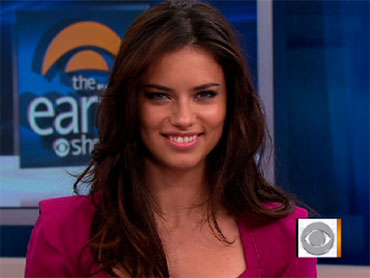 As one of Victoria's Secret supermodels, Adriana Lima is considered one of the most beautiful women in the world. But what makes her feel sexier than she's ever felt before?

On "The Early Show" Tuesday morning, new mom and co-anchor Erica Hill said, "Was it hard to get back out there in lingerie? You look great, but for any woman it's tough. No matter how good you look, you feel different."

Lima replied, "Actually, I feel more confident, even more beautiful, more sexy after I gave birth to my daughter."

However, Lima said, she was worried about getting back on the catwalk after gaining 50 pounds during her pregnancy.

"That's all (the weight) I tell," she said. "That's all I can say. ... I was very nervous about it. I say, 'Am I going to be able to, you know, lose the weight? I don't know how my body's going to react.' How fast I was going to lose the weight. It wasn't an easy road. But, you know, I'm persistent. So it wasn't easy to find, you know, an extra 30 minutes between Valentina's naps to just run to the gym and you know, do my jumping rope and my boxing."

"Early Show" co-anchor Maggie Rodriguez said, "Erica (Hill) has an 8-month-old. I have a 5-month-old. So we know exactly how you feel. On top of everything else here you have to go back to work and worry about is your child going to sleep through the night? Are you going to be able to juggle motherhood and your job. Did you feel that?"

Lima said, "I was afraid, because, you know, I wanted to be -- I want to be a good mother. You know, I wanted to give the best for Valentina. And she's, of course, my priority. So, yes, I was worried about, you know, giving as much time as I could possibly do for her. I felt guilty even to leave her asleep in her room. I cannot do that. I was, 'OK, baby you go to your room now,' and then after 10 minutes I would go back to her room, pick her up. I'm like, you know what? After she's going to grow up, she's going to be 15 and she's going to live alone for 40 years of her life. So what? Let me enjoy my moments with her."

She said, "I think that hormonal changes during pregnancy, I think a woman needs that for her body, for her skin. I feel more beautiful."

You can catch the Victoria's Secret Fashion Show tonight at 10/9 Central on CBS.