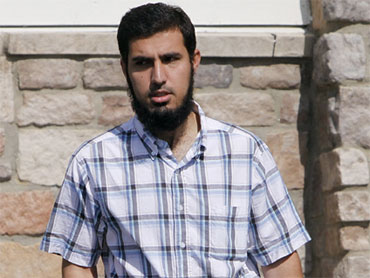 (AP Photo/Ed Andrieski)
The government slapped another one of its cards down on the table Thursday morning when it charged the most famous airport shuttle driver in American history, Najibullah Zazi, with conspiracy to use a weapon of mass destruction (really: conspiracy to detonate a bomb). The new count brings with it the possibility of a life sentence, without parole, and thus is of a more serious magnitude than the original charge, lying to federal agents, with which Zazi had been tagged last weekend in Denver.

The case against Zazi now becomes a true terror case—it won't be long before terror support charges are added to the blend-- and at first blush it seems much sounder than many of the other terror cases we've seen over the past half decade. For example, the allegations against Zazi and "unknown others" are much more detailed, and specific, than were the allegations and evidence presented against Jose Padilla, the once-upon-a-time-dirty bomber who ultimately was convicted of terror support (after the briefest of jury deliberations) in Florida.

For example, the feds say they have videotape of Zazi, and others, purchasing large quantities of hydrogen peroxide and acetone from Colorado beauty shops—ingredients, government lawyers say, that other terror suspects have tried to use to make bombs. They say they found a suspicious scale in his apartment and incriminating bomb-making instructions on his computer. They say they've found backpacks that might have been used in an attack. And they say they have evidence of Zazi attending a terror training camp in Pakistan.

Some of this evidence may turn out to be less incriminating than it now seems—this almost always happens, especially in these cases that start off with such hype. Some of the allegations may even prove false. But at this moment, with the rest of the case staring us in the face, and albeit with only one side of the story told, this case looks like one of the strongest terror cases the feds have been able to muster since Richard Reid tried to light his shoe on fire on a plane in front of a hundred witnesses. 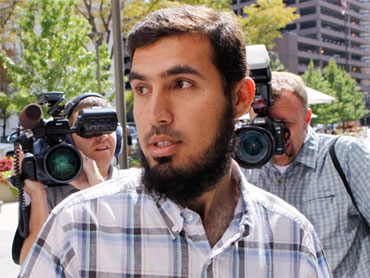 (AP Photo/Ed Andrieski)
If Thursday's new charge answered some of the questions swirling around the investigation it surely raised many more. For example, you can't be the sole member of a conspiracy. So if Zazi "conspired" to make a bomb with whom did he conspire? Where are the other men or women who may have been involved in the plot? Who are these "unknown others" who allegedly helped Zazi shop for peroxide? Do the feds know who they are? If so, why have those folks not also been charged?

The new charge (and the life sentence it could bring) also brings a new level of scrutiny upon Arthur Folsom, the young attorney in Colorado who advised his client, Zazi, to talk with federal agents last week—for three straight days. Did Folsom bring Zazi in to make a deal? Did Zazi insist that he be allowed to talk to the feds even though he has a constitutional right to remain silent? Will Zazi end up being a government informant against these alleged other co-conspirators? Could either Zazi or Folsom truly have believed things would work out okay last week after the initial allegations surfaced?

Zazi will now be moved to New York, where he will almost certainly get a new lawyer who will almost certainly spend a great deal of time trying to undo what Folsom has already done. The defense will claim that there are legitimate uses for peroxide, and acetone, and that it is not illegal to have purchase or possess a passel of new backpacks. Folsom is already on record as saying that Zazi was unaware that there were bomb-making plans on his laptop. We've seen many of these defenses before in these sorts of cases—and they almost always fail.

So there you have it. On Saturday night, the government charged Zazi with making false statements just to get him and his father off the street. On Thursday morning, the contours of the case became clearer. And, if Zazi truly is the terrorist the government says he is, it likely won't be but a few more days or weeks until we see more allegations, more charges, and more defendants thrown into the mix.