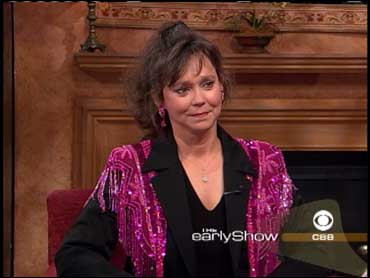 There's no shortage of books on how to plan a wedding or take care of a divorce, but rarely are two topics found in one book — until now.

"The divorce rate in this country is way high and climbing and I have certainly made contributions to that myself," she said. "But, statistically speaking, 100 percent of all divorces do start with weddings. So, hopefully, by reading both parts of this book, you can avoid whichever one of them it is you need to avoid."

The book is full of practical advice from a group of women known as the Sweet Potato Queens. Browne explains how the group came about.

"We're from Jackson, Miss., and started in 1982 when my good friend Malcolm White, a local entrepreneur, decided we needed a St. Patrick's Day parade," she said. "Now, Jackson is not a big enclave of Irish people — so he started the first parade and I declared myself the Sweet Potato Queen."

There are more than 5,000 Sweet Potato Queen chapters in 30 countries. Browne says that they come to Jackson for the parade every year.

"A chapter in Saudi Arabia whose motto is 'No veils for us' and all come ... it's the largest St. Patrick's Day parade in the country," she said. "(It's) the third weekend in March and it's the only one that everybody can be in. It's a people's parade. You can be in there and it's a benefit for the children's hospital."

"You've got hunting season. You've got football in the fall — college football. Of course, NASCAR is universal and all the time," she said. "We had a queen last year whose son called her and said 'I'm getting married the third weekend in March.' She said, 'I'm so sorry, I'm going to miss your wedding.' He had to change the wedding date because it's the date of the parade."

In the book, Browne writes about her marriage proposal to the "Cutest Boy in the World."

"I had decreed that all of the queens needed to learn how to hip-hop. There are some things that cannot be legislated. Hip-hop is one of them. We did not learn to hip nor hop. Fifty-year-old white women cannot hip-hop. We admit it. But we were in this class and it had been an extraordinary sweaty failure night. And the door opened.

"The studio was in lockdown. We didn't want anybody witnessing this debacle. So the door opens, which should not have happened. And in came the cutest boy in the world, my daughter, my mother, all of the husbands and boyfriends of the queens, friends and family from all over the country.

"Everybody knew except me. And he's doing the whole thing on his knees. He had a very large diamond, which of course is the only suitable size — I'm too big to wear small. So he knew that he had to get the approval not only of me, but of all the queens, so he proposed to all of the queens and we all accepted.

"We got married New Year's Eve, so we always lose track of what year. This was our third anniversary."

The book is full of practical advice as well as recipes.

Click here to read an excerpt of the book.