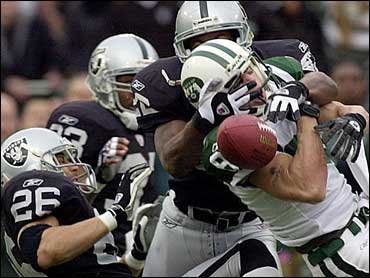 But nobody is sending fewer players to the Pro Bowl when the season is over. Why? Because you can't get any lower than zero.

Of course, the Titans are lucky. They still have a chance to show the voters how wrong they were. If they win Sunday against the Oakland Raiders in the AFC title game, they'll turn their Super Snub into a trip to the Super Bowl.

"We took it for what it was worth, and moved on," Titans running back Eddie George said of the snub. "We know we've got some great players here."

With his career-high 3,387 yards and 22 touchdowns, McNair would have fit in well at the Pro Bowl. He finished third in the MVP voting. Yet he got beat out by Drew Bledsoe, Peyton Manning and, of course, league MVP Rich Gannon of the Oakland Raiders, who play Tennessee on Sunday in the AFC title game.

With 1,165 yards, George certainly wouldn't have shamed himself by going. But Priest Holmes, LaDanian Tomlinson and Ricky Williams all had better stats.

All had excellent seasons, as well, but found themselves part of one of the more surprising Pro Bowl snubs in NFL history. Heck, the expansion Houston Texans sent two guys and, yes, even the 2-14 Cincinnati Bengals will be sending one player, fullback Lorenzo Neal, to Hawaii.

The Titans? They'll be sitting at home.

"I think it's a slap in the face," McNair said.

When the news had just been delivered, Tennessee took it out on Jacksonville (with one Pro Bowl player) with a 28-10 victory, one of its most thorough performances of the season. The Titans wrapped up the AFC South title that day, as well.

"For this team to be one of the hottest teams in the NFL, and for no one to go to represent Tennessee in Honolulu is absurd," Bulluck said after that game. "People are just going to have to feel the wrath."

While the Titans keep searching for respect, the Raiders are dealing with almost the opposite emotion. They practically have too many stars to NOT make the Super Bowl.

Joining Gannon in Hawaii will be Jerry Rice, Lincoln Kennedy and Rod Woodson. Gannon led the league with 4,689 yards passing. Kennedy is one of the best tackles in the game. The other two will be in the Hall of Fame when they retire.

With so much talent come expectations and the pressure to perform.

Asked a question with the words "Super Bowl" in it Thursday, Kennedy interrupted the reporter.

"You're getting way too far ahead now," he said. "I've got other concerns on my mind right now."

The Titans are 11-1 since Oct. 13 and are turning into much more than the ball-control and field-position team they were during their first Super Bowl run in 1999.

Last week, Tennessee went to a no-back offense and McNair threw for 334 yards in a 34-31 playoff win over Pittsburgh. He ran the same offense in a rally from 12 points down against the Giants last month.

On defense, the Titans have proven they're much more than just Jevon Kearse, the fourth-year defensive end who had 14.5 sacks his rookie season when the Titans went to the Super Bowl.

"I've got concerns across the board about him," Kennedy said. "Part of it is because we don't have a lot of film on him."

Indeed, Kearse has been dealing with a foot injury all season and has barely played. Playing in Kearse's place, Carlos Hall has eight sacks this season. Kevin Carter leads the team with 10. Meanwhile, only one runner, Corey Dillon, surpassed the 100-yard mark against the Titans all season.

All that, again, begs the question: Could a team this good, a team one win away from the Super Bowl, really not have a single all-star?

"That's totally irrelevant at this point," George said. "We understand that some guys felt they should have been there. But that's how it goes. And, hey, all we can do now is pull for each other and try to win."