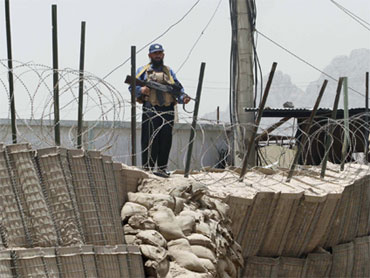 A spokesman for the Afghan president said Monday that Hamid Karzai would order all private security companies in the country disbanded within four months.

Spokesman Waheed Omar said the decree was expected later Monday. It will both set the deadline and detail a process through which the companies should cease operations.

Omar spoke at a press conference in the capital and declined to give further details until the decree was released.

An official said earlier Monday that the U.S. military supported the Afghan government's plans to dissolve private security companies and was tightening oversight of its own armed contractors in the interim.

"Certainly we understand President Karzai's statements that he is determined to dissolve private security companies. We are committed to partnering with the government in meeting that intent," said Brig. Gen. Margaret Boor, head of a new task force to better regulate and oversee private security operations. The group, called Task Force Spotlight, started work in June.

However, Boor declined to give a timeline saying private security contractors can only be phased out as the security situation improves. That could be a long time given worsening security in recent months in areas of northern and central Afghanistan that had previously been relatively safe.

About 26,000 armed security contractors work with the U.S. government in Afghanistan, including 19,000 with the U.S. military, Boor said. The majority of military contractors protect convoys, though some also provide base security, said Maj. Joel Harper, a spokesman for NATO forces.

Karzai has said such responsibilities should fall to either enlisted military or police, though its unclear how soon Afghan forces would be ready to take on additional jobs.

"Since the Afghan army and the Afghan police are not quite at the stages of capability and capacity to provide all the security that is needed, private security companies are filling a gap," Boor said.

Though the task force is new, she said it is already taking steps to improve oversight of security firms, including registering all contractors and ensuring they have the necessary qualifications and receive training on appropriate use of force.

Contractors have been in the spotlight on several occasions in Afghanistan.

In 2009, a private security contractor hired to protect the U.S. Embassy in Kabul was exposed for holding lurid parties flowing with alcohol, with guards and supervisors photographed in various stages of nudity. A U.S. government investigation also found Amorgroup employees frequented Kabul brothels.

In February, U.S. Senate investigators said the contractor formerly known as Blackwater hired violent drug users to help train the Afghan army and declared "sidearms for everyone" - even though employees weren't authorized to carry weapons. The allegations came as part of an investigation into the 2009 shooting deaths of two Afghan civilians by employees of the company, now known as Xe.

Last month police a crowd of angry Afghans shouted "Death to America" after an SUV driven by U.S. contract employees from DynCorp International was involved in a traffic accident that killed four Afghans.