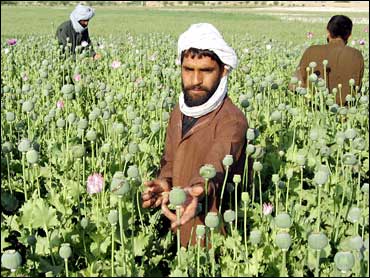 An Afghan vice president has called for aerial spraying to destroy opium poppies after the cultivation of the illicit crop reached a record high this year, accounting for over 90 percent of global supply, according to a report Sunday.

Ahmad Zia Massoud, one of Afghanistan's vice presidents, said the international community's counternarcotics policy has failed in southern Afghanistan, where most of this year's crop was grown.

Writing in a commentary in Britain's Sunday Telegraph newspaper, Massoud said poppies have spread like "cancer" in Helmand province, where British forces are based.

"I have no doubt that the efforts of Britain and the international community in fighting the opium trade in Afghanistan are well-intentioned, and we are grateful for their support," he wrote.

"But it is now clear that your policy in the south of our country has completely failed."

Last week, the U.N. announced that the area of land used to cultivate opium had increased by 17 percent this year, with more than half of it in Helmand, a Taliban stronghold.

The report forecast that Afghanistan would produce 9,000 tons of opium this year - about 93 percent of global supply. That is up 34 percent from 2006, and is enough to make more than 880 tons of heroin.

The surge in production has stepped up pressure on President Hamid Karzai's government to consider new ways of to curb it - including aerial spraying, which it has previously opposed, saying that tactic would harm legitimate crops and water supplies, thus increasing rural support for the Taliban militia.

Massoud said the booming opium trade is closely linked to insecurity that prevails in the south, where Taliban are waging a bloody campaign against foreign and Afghan security forces.

He also said those growing the lucrative crop are not being punished.

"The time has come for us to adopt a more forceful approach. We must switch from ground-based eradication to aerial spraying," Massoud said.

He said that spraying is "safe," and that "farmers will no longer be able to bribe officials to protect their crop."

"The opium directly supports those who are killing Afghan and international troops," Massoud said. "Failure to achieve a substantial reduction in the opium crop will be equivalent to supporting the Taliban."