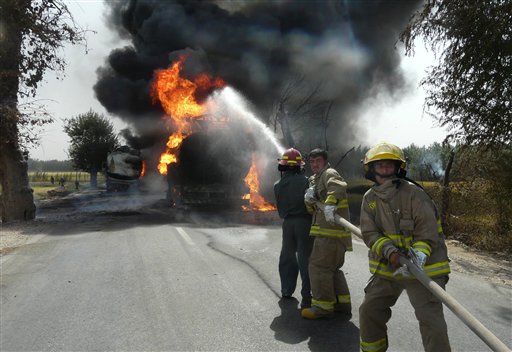 President Barack Obama is considering a range of ideas for changing course in Afghanistan, from pulling back to staying put to sending thousands more troops to fight the insurgency.

A look at the options and their implications for achieving Obama's stated goal of defeating al-Qaida.

A full, immediate withdrawal of American forces does not appear to be in the cards, not the least because U.S. allies in NATO share the view that abandoning Afghanistan now would hand a victory to Islamic extremist forces such as the Taliban that are aligned in some respects with Osama bin Laden's al-Qaida. Some argue that because the al-Qaida figures who were run out of Afghanistan when U.S. troops invaded after the Sept. 11 attacks are now encamped across the border in Pakistan, there is no point to a U.S. military presence in Afghanistan. A related school of thought holds that the very presence of foreign troops in Afghanistan adds to the country's instability and fuels its insurgency. Obama has taken a different view. Less than two months ago he said, "If left unchecked, the Taliban insurgency will mean an even larger safe haven from which al-Qaida would plot to kill more Americans. So this is not only a war worth fighting. This is fundamental to the defense of our people."

A less drastic alternative to a full-scale retreat is a partial pullback. A reduced U.S. force would stay mainly to train and advise the Afghan national army and police. U.S. special operations forces would continue their hunt for most-wanted extremist leaders in Afghanistan. Pilotless drones such as the armed Predator would take out al-Qaida figures on the Pakistan side of the border. This would essentially end the counterinsurgency mission of U.S. and NATO forces. The reasoning is that the fight is not worth the cost in blood and treasure, and al-Qaida is a more urgent priority. This counterterror option would amount to a reversal of the strategy Obama endorsed in March. In the view of military analysts Frederick and Kimberly Kagan, who favor an expanded counterinsurgency campaign, a shift to only training and counterterror operations would be a big mistake. They argue that it would empower the Taliban and al-Qaida, endanger remaining U.S. troops and diplomats and allow Islamic extremists to portray the U.S. pullback as a defeat for the forces of moderation.

One of those advocating no short-term change in the size of the U.S. force in Afghanistan is Sen. Carl Levin, D-Mich., chairman of the Senate Armed Services Committee. He argues for putting greater emphasis on training the Afghan security forces and accelerating their growth. In this approach, the counterinsurgency campaign against the Taliban would continue on course. Additional U.S. troops would be required for the training mission, but not for combat. The flow of equipment for the police and army would be expanded. More effort would be focused on persuading lower-level Taliban fighters to lay down their arms. Gen. Stanley McChrystal, the top commander in Afghanistan, is calling for accelerated training of Afghan forces. But in his view, more combat troops also are required to retake the initiative from the Taliban, which now control or contest large parts of the country. Earlier efforts to speed up Afghan training stalled in part because of a lack of NATO trainers.

This is the McChrystal plan, which he calls "a fundamentally new way of doing business." In military parlance, it would be a classic counterinsurgency campaign that could last for years. It would mean sending more U.S. troops _ perhaps as many as 40,000. The general says it would mean redefining the fight in ways that enable Afghans to regain control of their own country. McChrystal spelled out his reasoning in a report weeks ago to Defense Secretary Robert Gates, who asked for a comprehensive assessment of the war effort when he removed McChrysal's predecessor, Gen. David McKiernan, in May in search of "fresh thinking, fresh eyes." McChrystal says there is no guarantee his approach will work. Critics worry that this escalation would only lead to others, creating a quagmire. But McChrystal argues that if the Afghan government falls to the Taliban _ or is unable to counter international terrorist networks _ then Afghanistan could again become a base for al-Qaida to launch an attack on the U.S. That's just what Obama says must be avoided.